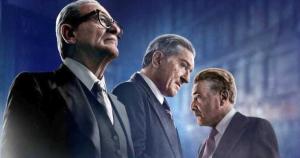 When we first see Frank Sheeran in Martin Scorcese’s The Irishman, he’s sitting alone in a nursing home. He easily blends in with all the other aged residents of the home. Frank is just another old man, but, as The Irishman plays on, we learn that he’s anything but.

Frank’s a truck driver, or rather, he was a truck driver. Back in the 50’s, Frank ran sides of beef across Pennsylvania. It’s a stable job for young Frank, who is trying to raise a family after returning from WWII. It pays well, and the Teamsters Union has provided him with cushy benefits and protections. Protections just cushy enough, we learn, for Frank to get off scot-free for selling some of that beef to local mobsters.

Frank’s a master at following orders, something that mobster Russell Bufalino uses to his advantage. Russell and Frank form an instant bond. Russell becomes a close friend and boss, and Frank proves to be a reliable asset to the Philadelphia Mob. He’ll smuggle goods, beat people up, and, on occasion, “paint a house”—a euphemism for shooting people. Frank proves to be so reliable that Russell sets him up with a job in the Teamsters Union, right underneath The Man himself, Union President Jimmy Hoffa. Hoffa’s a rising troublemaker for the US Government, as his constant pressing for better conditions of the Teamsters often threatens to put the economy on-hold.

Frank becomes Hoffa’s bodyguard and the liaison between the Union and the Mob, which has a vested interest in Hoffa’s activities. Just as he grew close to Russell, Frank also grows to love and idolize Hoffa. Thus, Frank always finds himself as the servant of two masters: the Mob and Jimmy Hoffa. Eventually, tensions between Russell and Hoffa come to a breaking point, and Frank must choose which master he’s going to continue to serve.

Scorcese’s made a lot of gangster movies during his legendary career. Goodfellas and Casino are fun, engaging crime flicks that simultaneously glorify crime while hammering home the disastrous effects it can have. The Irishman, while lacking the youthful energy of those two movies, follows suit.

The true strength of The Irishman comes in its performances and its screenplay, and boy, are they powerhouses. Robert De Niro (with the help of some incredibly unnoticeable de-aging CGI) is fantastic as Frank Sheeran. Sheeran, who spends his entire life following orders, adopts the likeness of an uber-violent Forrest Gump, shaping history with actions that never truly seem relevant to him until he’s too old to make amends. The two most impressive performances, however, come from Al Pacino as Jimmy Hoffa and Joe Pesci as Russell Bufalino. Pacino brings an energy to Hoffa that is palpable, making the real historical figure into a larger-than-life persona. Pesci, on the other hand, plays Russell with a quiet dignity, a change of pace from the short, angry character he perfected in Goodfellas and Home Alone. In short, Pacino and Pesci are amazing in this movie, and they both deserve Oscars.

Steven Zaillian, The Irishman’s screenwriter, crammed every possible detail into his script, leading to an intimidating runtime of 3 ½ hours. I realize that this may be more time than many readers may want to commit, but I promise you, it is worth it. Through those 3+ hours, we live as Frank lives, we see each and every negative thing he does. The gravity of each murder, each compromise, each immoral act sticks with us as if we did them ourselves. In the end, when Frank looks back on his life, he sees the wrongs he committed, and how it’s alienated him from the rest of the world. We feel that with him, and to me, that’s more than worth 3+ hours of my time.

A few months back, Martin Scorcese publicly declared his disdain for Marvel movies and was met with scorn and outrage. I don’t agree with his comments, but I don’t necessarily agree with his detractors either. Marvel movies have their worth, and millions of people see them each year. What Scorcese meant, however, is that big flashy cinematic products all-too-often overshadow the deep, meaningful films that also occupy the movie theatres—films like The Irishman. The good news is, The Irishman is on Netflix, and the only thing keeping people away is a subscription.

So, if you have time, watch The Irishman. It’s one of the best films of the year and it’s probably right at your fingertips. If you don’t have time, there are plenty of people on the internet who’ve written guides to watching it in manageable chunks. Either way, don’t sleep on this film.