Comebacks. These are games that teams dream about. These games are the reason that teams and players put in hours of extra work in the off-season to be able to perform in big moments that ultimately turn a good season into a great season. 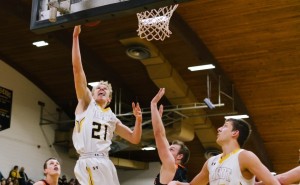 This is exactly what happened for the Dordt men’s basketball team on Saturday evening against the Midland Warriors.

The Defenders trailed by nine points with only 6:11 in the game. Dordt would finish the game on a 28 to 10 run and secured the victory by a final of 96-87.

“The comeback was awesome for us,” said senior forward, Josh Van Lingen. “We got a few big defensive stops and had some guys step up and hit big shots which got us the momentum and the crowd going which helped carry us to the win.”

With the win, the Defenders move to 3-3 in GPAC play and 9-4 overall. The Defenders now sit in 5th place in the GPAC standings behind Northwestern.

The Defenders will head to Hastings to play their final conference game before Christmas where they will take on the Broncos who currently sit at 6-5 overall and 1-4 in GPAC play.

Following the road matchup, the Defender will head to California over Christmas break for two games. The Defenders are looking forward to the trip that will not only include playing games but also heading to a Golden State Warriors game and visiting Alcatraz.

“The California trip will be a lot of fun and a time for our team to bond and hangout for a while with no worries about class,” said junior guard, Ben Gesink. “I’m looking forward to visiting Alcatraz the most as I’ve never been there! We are also going to a Warriors vs. Pelicans but sadly Curry, Thompson, and more than like Zion are all out with injuries.”

For some of the players, this will be their first trip to the Golden State which will provide an exciting and new experience for them over the semester break.

Following the trip to the West Coast, the Defenders will return home to resume conference play. The Defenders are excited about the position that they are in and the opportunities that they have in front of them.

“After Christmas break, we get into the heart of GPAC games which are always a lot of fun as every team is good and every game matters in conference play,” Gesink said. “I am looking forward to how much our team can grow throughout the rest of the season and see if we can’t put some runs together the rest of the season.”

As with most teams in the middle of the season, the Defenders are constantly looking for ways to improve their games.

For Dordt, they realize that if they can shore up their team defense that they will put themselves in a great position down the stretch.

“We have talked,” said senior guard and Hull native, Chandler Brunsting, “and we think if we can tighten up our defense just a little bit more every day then by the end of the season we will be hard to beat.”

With this on their mind, the Defenders’ goals for the rest of the season are all very much attainable.

“If we continue to get better every day then we feel like we can compete in every game and hopefully make it to Nationals by the end of the season,” Brunsting said.

The Defenders return to the DeWitt on January 2nd to take on the Doane Tigers. The game starts at 8pm and will be available on KDCR.