Recent opinion pieces have run in the Diamond calling for unison between parties and condemning actions of particular political leaders, adding to a broader narrative of gratuitous political commentary present during this frenzied election season. I am going to be more direct and possibly abrasive than my peers, because surprise, I have strong feelings! Short and simple: Mike Bloomberg sucks.

Let’s examine Bloomberg from a non-political standpoint first, and then come back for a look at his policies. First: Mike Bloomberg is extremely rich. Like, extremely rich. You simply do not become worth $60 billion without extorting, exploiting, and abusing your way to the top. Because of this vast wealth, Bloomberg is able to buy up every available second of ad time on relevant networks and run ads that feel more impersonal and out of touch than your racist uncle at Thanksgiving trying to talk to your foreign exchange roommate. Bloomberg also owns one of the largest news conglomerations in the United States, which funnels wealth into his pocket, while subtly expanding his propaganda-like messages.

Since launching his campaign, Bloomberg has spent over $450 million on ads, more than likely everyone reading this combined will generate in their lifetimes. The candidate claims to be running for the best interests of America, but would be much better suited spending this money to support other candidates, local and senate elections, donating to fight global warming, and a host of other issues. The Bloomberg campaign complained of vandalism (the alleged vandalism was actually a spray painted piece of cardboard taped to the building) against one of their field offices in Flint MI, where residents have been without clean water for 2,135 days. It would cost an estimated $55 million to replace the contaminated pipes in the city, a mere 12% of the ad spending for his campaign, or less than a tenth of a percent of his actual wealth. 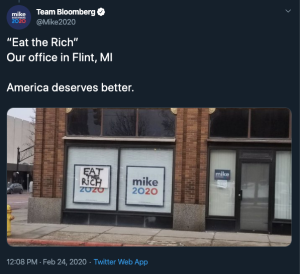 On the issue of wealth, Bloomberg has most commonly attacked Elizabeth Warren and Bernie Sanders, two candidates well known for their desire to tax the wealthy for the benefit of all people in the United States. Under Elizabeth Warren’s tax plan, Bloomberg would pay $6 billion next year, a massive amount to you and me, but marginal to the billionaire. Bloomberg, likely, sees this whole President thing as a means by which to maintain and expand his wealth, not unlike Trump. The hundreds of millions of dollars spent on this election campaign are a mere defense and precaution to allow Bloomberg to hang on to billions more.

The second reason Bloomberg sucks is an issue which is all too commonplace in centerstage American culture: sexual harassment and assault. Bloomberg has had 65 sexual assault, harassment, and misconduct accusations brought against him since 1969. He has continually degraded women, and members of the LGBTQ community. Bloomberg is on record in a book he wrote under his own name, saying “I know for a fact that any self-respecting woman who walks past a construction site and doesn’t get a whistle will turn around and walk past again and again until she does get one.” Not only is this out of touch and downright offensive, it is one of the least-aggressive in his history of remarks. In one lawsuit, Bloomberg is reported to have told an employee multiple times to get an abortion as to not miss work for maternity leave. The employee had her child and left the company. For all the allegations brought against the candidate, there is also an unknown amount of Non-Disclosure Agreements which Bloomberg refuses to make public.

On the issue of policy, Bloomberg adds nothing to the conversation in the already crowded democratic field. His policies are weak and centrist at best, and borderline Republican at worst. Bloomberg, it is worth noting, spent time in the Republican party in the past for attempts at different offices, and only changed to be a Democrat in recent years. He is a member of the party in name only. Bloomberg is an obscenely wealthy, alleged sexual predator and political opportunist who has no reason to be in the political landscape in such a challenging cycle. He would be much better off supporting the candidates from outside the ring, or better yet keeping his Franklin–the turtle–looking–self off the stage completely.