Kids latch onto specific sports teams mostly due to those teams’ recent successes. For me, as a kid growing up in the Minneapolis suburbs in the mid-2000s, I had some options. The Twins – as frustrating as they may be when it comes to playoff success – were at least able to string together multiple seasons of playoff runs. The Vikings – another perennially snake-bitten playoff team – had some solid teams and actually made their way to two NFC championship games before I turned 18. The Wild – even with their first-round playoff exits every year – allowed me to watch good hockey for the first time and truly enjoy the game. 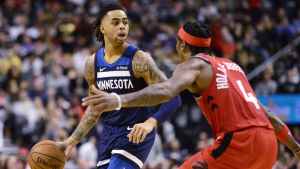 Notice that out of the four major sports teams in Minneapolis/St. Paul, I only named three. That’s because for most of their history, the Minnesota Timberwolves have not shown even a fraction of as much ability or success as the three previously mentioned teams.

I don’t have a passion for following the NBA as much as I do the other three major professional sports leagues. I probably even follow MLS more closely than I do the NBA. I believe this is due, in part, to the fact the Timberwolves almost rarely find the time to even give fans a glimmer of hope. When they do finally manage to find something to make fans excited though, that is when things really get interesting.

Starting in 2004, the Wolves missed 13 straight seasons of playoff basketball. In 2017, after the drafting of franchise cornerstone Karl-Anthony Towns in 2015, the hiring of GM/coach Tom Thibodeau, and the trade for a star player in Jimmy Butler, the Timberwolves experienced their first playoff appearance I can remember. After being promptly shuffled out of the playoffs by the Houston Rockets and James Harden in a 4-1 series, fans were disappointed, but still excited to see what the team had in store for next season.

The team had shown to fans they were ready and able to win. And in doing so, it lured these poor fans into a trap before they even knew what hit them.

In the next season, the Wolves struggled. And soon enough, their star player Jimmy Butler demanded a trade and burned every one of his bridges as he left town in a single practice. Media members witnessed him swearing up a storm and leading a rag-tag group of third-string players to handily defeat the first-team players and sufficiently embarrass the organization.

Butler was eventually traded to the Philadelphia 76ers. The firing of coach Tim Thibodeau followed shortly thereafter, and the Timberwolves were suddenly back at square one.

To recover from the mistakes of past regimes and rebuild the team without a full tear-down, Gersson Rosas was hired. Having experienced much success in the front office of the Houston Rockets, Rosas brought promise to an organization who doesn’t get much anymore.

What the Timberwolves needed to get over the hump was star players. Saddled with bad contracts that left them with minimal cap space, however, meant these star players would not be walking in the door during free agency.

At the trade deadline, Rosas got to work. He ended up trading away two draft picks and seven players in return for one draft pick and eight players – headlined by certified star point guard D’Angelo Russell.

The D’Angelo Russell trade is supposed to give Wolves fans reason to celebrate and be excited for the future. The real question then becomes: Will these Timberwolves be any different from the previous iterations?

My first inclination is to say no. With the Minnesota Timberwolves, whatever can go wrong will go wrong. As a result, I believe the Wolves though well-intentioned and appearing as a team on the upswing, will continue to operate in their failing ways.

The Minnesota Timberwolves have and will continue to be the “little brother” of the four major sports teams in Minnesota until they are able to consistently prove themselves to be more than a habitual participant in the draft lottery. I certainly wish them the best of luck, but I just don’t see this team pulling it together anytime soon.