Twelve black and white portraits stare out at viewers passing through the classroom building. The words “Adoption Project” in all caps stand out on tan paper plastered on the wall. Handwritten messages inform the viewer that feedback is encouraged and various comments are speckled around the images. Above each photo, a 9 x 11 sheet of paper hangs with each individual’s name and their experience with the adoption process. 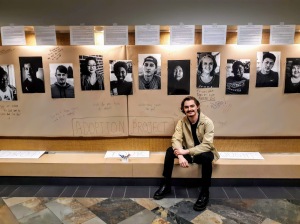 Justin Kamstra, the photographer and initiator of this project, is a recent Dordt grad who loves photography. After switching his major to graphic design and transferring from Northwestern, he realized that if he wanted to be more successful, he should pick up another skill. He chose photography two years ago and realized how much he loved doing it.

Over the past two years, Kamstra has done about 220 shoots, averaging around three or four shoots a week. The Adoption Project has been his first series targeting a specific demographic.

“It’s really awesome,” he said when asked about how he feels about larger projects. “I think I’ll continue doing it and maybe write a book someday about it all.”

Kamstra’s own story began with his adoption as a baby out of Sioux City, IA, from Bethany Christian Services.

“My mom and dad had five years of infertility and miscarriage and feeling heartache because of all that.” he said. “That was God in their mind telling them to adopt.”

Kamstra’s parents always told him he had been adopted, but never made him lesser than their four biological children born after him.

Although there is a common belief that children who are adopted feel less loved or like they are missing something in their life, Kamstra denies it strongly.

“Being adopted has been a big part of my life, but hasn’t defined [my life],” Kamstra said. “I have always known I am loved. I’ve just had a positive experience with adoption, and it gives me the freedom to pursue whatever I want in life without anything holding me back.”

The inspiration for his project was partially therapy to Kamstra, and partially to bring knowledge of other’s stories to the community.

“The purpose of the project was to bring awareness to, not only the idea of adoption, but the reality of people’s stories,” Kamstra said. “Having grown up in northwest Iowa, [it can be hard to remember that] lots of other areas in the world deal with other situations [that are incredibly difficult], and it’s important for us to have that perspective [and work] to make a difference. I wanted to put it out there as raw and real.”

“It was a really intimate process,” he continued. “I knew eight of the twelve participants going in, but the others I had never met or known before this.”

He continued to say that adoption affects each person differently, and they all have their own life experiences that change how they see things.

“God loves everybody, and I think we group people and associate people all the time,” Kamstra said. “I think we need to be more accepting of others who are different.”

Kamstra encourages people to comment on the wall. There are markers in a jar for people to give feedback about adoption, his photography style, or on another viewer’s comment.

“As an artist, I have to be ready for what people say,” Kamstra said. “Art is supposed to be engaged with, so I urge people to put their real thoughts out there.”

Kamstra’s future plans include moving to Chicago to work for an ad agency doing photography, video, and graphic design work. He hopes to do more with portraits and get involved in the fashion scene in Chicago.

Kamstra also wishes to continue working on the project, finding more faces and names and stories to add.

“In my life and most of the stories out there, [adoption is] a very positive thing,” Kamstra said. “It gives someone the opportunity that’s possibly much safer or healthier. To give someone that opportunity at life is so cool. So even if you are planning on having biological children, I strongly encourage you to give someone else less fortunate a chance too.”