Chatter of the Turquoise Table at Dordt has been on social media and in the hallways for the last week. The same tan tables fill the commons and Grille area, but several signs covered in turquoise handprints have been installed, to facilitate community between strangers and friends.

Christianna Marcy, a Dordt sophomore studying elementary education, first heard of the Turquoise Table project through a radio interview on an episode of the Focus on the Family podcast. The ministry was started in Texas by Kristin Schell, a woman who wanted a location for hospitality in her suburban community. She left a picnic table, painted turquoise, in her front yard and turned it into a way for people to gather and have informal community. Schell’s table prompted others to do the same, and today there are turquoise tables in each of the fifty states and in eleven different countries. 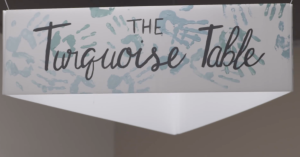 The idea for having a turquoise table at Dordt came in the Fall semester, when Marcy was listening to Sam Ashmore speak at GIFT.

“I saw this vivid picture of a turquoise table in the commons and thought “wait a minute, we could have it here,” said Marcy.

Ashmore’s message emphasized the power of community through simply having food together. He encouraged students and small groups to get together often for meals and simply fellowship together as a means of growing.

“If that’s not a sign, I don’t know what is, so I thought I’d just keep moving until the door closes,” said Marcy.

The process of installing the Turquoise Table has been a long journey. Each week, Marcy would meet with a different person who would then lead her to the next step in making this vision a reality. She met with Sam Ashmore, Robert Taylor, Student Government, along with those in charge of the commons and Grille, graphic design, the Dordt Art Club, and several students in a graphic design class.

“So many people have used their gifts for this,” said Marcy. “It’s definitely not just me at all.”

Marcy hopes that the table will become a natural part of campus. She wants to see students sitting at it as normally as you would choose any table in the commons or Grille area. Even when the hype of something new fades away, she doesn’t want to see the intentionality change, but for it to become natural.

“It’s not a huge deal to sit here, but a way to say that I will take time out of my day to intentionally meet new people and welcome new conversations,” said Marcy.

In the few days that the table has been in effect, Marcy has already seen depth in her conversations with others and has met people new to her. There is an openness to anyone at the table, whether they are students or faculty. Some individuals come and sit at the table, while others bring small groups with them.

“Now it’s an opportunity to go and meet new people and sit there and it’s fine, because everyone is open to that,” said Heather Vander Woude, a senior.

“I know that Dordt does community very well,” said Rachel Wordes, who has worked on this project alongside Marcy. “But I think that this is a way to make that even more impactful and influence a lot of people.”

“The hope and the dream for [the Turquoise Table] is that it creates a place for students to belong,” said Sam Ashmore. “When you look in the Gospels at the person of Jesus, something He always does first is creates a space for people to belong and feel accepted.”

Dordt is a place that wants to continue to grow in diversity and community, and Marcy wants this to be a way to do that. It’s in the small moments that relationships can be founded, and the Turquoise Table takes away the scheduling behind relationships to enable people to sit, talk, and listen.