The day dawned dark as the last Sumatran Rhino died in Malaysia. The hope of reviving the species lay with this female, and her dying breath expelled that hope. 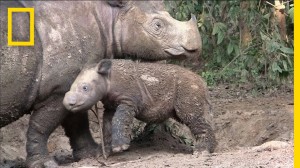 Since the species dwindled to the last few in the early 2000’s, officials in Malaysia were thrilled when they captured a male Sumatran Rhino in 2008. They named him Tam and tried to pair him with their two other females, Iman and Puntung, in hopes of breeding the next generation. Instead, things took a sharp downward turn.

In a National Geographic article, Margaret Kinnaird, wildlife practice leader for WWF International, said, “We hung so much hope on Tam to produce offspring in captivity, but that hope was dashed when the remaining two females at Tabin were unable to carry fetuses.”

Tam, the last male Sumatran Rhino, died soon after in May 2019, without leaving a legacy. Within six months, the other two females also perished, Iman being the final casualty on November 23.

The original loss of this species is attributed to habitat loss and poaching. This tragic event is a wake-up call to take better care of the environment.

“It’s very sad that this whole situation has occurred, because each animal is part of God’s creation,” said Mikayla Balt, an Environmental Studies and Natural Resource Management major at Dordt. “We should be protecting them, not destroying them.”

Fellow Environmental Studies student Jemmie Harrouff hopes this situation will serve as a catalyst for change.

“It’s really sad whenever another animal [species] dies [off],” Harrouff said. “It also will hopefully wake people up to saving the animals we have now.”

Officials are desperately trying to find a way to bring the Sumatran Rhino back to Malaysia. There are less than 80 Sumatran Rhino left in the entire world, but several have been located on nearby islands Sumatra and Kalimantan. The plan is to capture as many wild rhinos as possible and transport them to a monitored sanctuary.

This isn’t the first time attempts have been made to breed the rhino in captivity. The females kept aborting the calves, and now officials are concerned about the bottleneck effect: the population is so few that there is not enough genetic diversity.

So, we must ask, what is to stop the species from going extinct again?

This is not a simple issue to fix. Harrouff believes educating the public is an important step, followed by policy changes. She acknowledges that it isn’t cheap and encourages resources to be put toward saving the animals we have now, rather than diverting them to bring back species that are already gone.

Dordt students constantly hear about the cultural mandate, but how often is it applied? An entire species faces extinction. Where are the Christians that are called to redeem creation?

“It’s going against the cultural mandate, which is to fill the earth,” Balt said. “We’re supposed to be taking care of it, and when God’s creation dies, that’s not really fulfilling it.”

“I know a lot of people think that [the cultural mandate is] just to harness and use natural resources, but it’s also to do that in a sustainable way, to maintain their integrity,” Harrouff said. “I believe that God made some of creation just for us to enjoy aesthetically; it has intrinsic value.  It doesn’t have to be doing something for us.”