After shutting out Doane and Concordia in the last two weeks, the Dordt football team seemed poised for another good outing against the Hastings University Broncos.

The Defender offense got off to a fast start, and after only one quarter, the lead was 21-0 in favor of Dordt, while on the defensive side of the ball, they continued their streak of nine straight shutout quarters against opposing offenses. 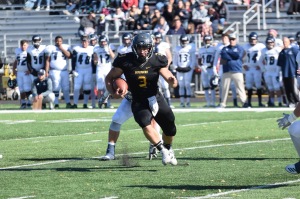 Quinton Murphy, a graduate transfer defensive back from the University of Northern Iowa, said, “There’s some sort of natural pressure to not be the guy who gives up the shutout, but we couldn’t play with that in our mind.”

Murphy finished the game with three tackles and a fumble recovery early in the 4th quarter to put the final nail in the Broncos’ coffin. Murphy was not the only player to recover a fumble on a slippery Saturday afternoon in Hastings, however, as both teams lost three fumbles during the matinee.

When the clock hit zero, it ended up being another record setting day for the Defenders. The final score of 70-28 was the most points Dordt has scored in the history of their program. Additionally, 733 total yards gained was the most by an offense in the Defenders’ history. The previous record was set earlier this season against Dakota Wesleyan.

Jungling finished the day receiving 114 of of Clayberg’s 135 passing yards, including the sole touchdown reception on the day. “Hastings focused so much on our running game which made it easier for me to find space down the field in the passing game,” Jungling said.

It was arguably Dordt’s best passing game of the season and it was nice to see the Clayberg-Jungling connection get back on track. Jungling starred in a productive offensive drive that ended with a touchdown at the beginning of the 4th quarter. Sixty-eight of the drive’s yards came from Jungling, including a beautiful back shoulder catch in the corner of the end zone for a touchdown.

“Noah was throwing the ball extremely well and we were able to take advantage of the one-on-one match-ups in the secondary,” Jungling said. “When the offense rushes for nearly 600 yards, it definitely makes it easier to throw the football when [Offensive Coordinator Aaron] Mingo calls for it.”

Dordt’s final two games of the season come against Briar Cliff and Midland, both at Open Space Park in Sioux Center. The Defenders, who are receiving votes in the national poll, hope to sneak their way in to be one of the sixteen teams to make the NAIA football playoffs. In order to have any chance of doing so, they will have to take care of business in their final two games of the season.