The Dordt University men and women’s basketball teams have just begun their season. In the preseason polls, the men’s team was ranked at 25th in the country and the women’s team came in at 5th. With a lot of returners, both teams are primed for a late tournament run this year. 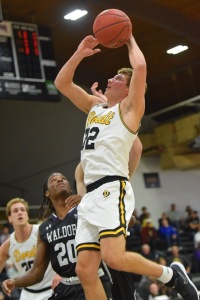 The men’s team have played a total of three non-conference games already. In those first three games, they came out with a 2-1 record, with wins against Waldorf and Valley City State and  a loss to Mayville State.

Junior Garrett Franken, who leads the men’s team in points and minutes thus far, is interested to see how the team will respond after their first loss.

“Mayville was a good team and that was our first loss,” Franken said. “It will be interesting to see how we respond in our next game, but I’m confident that we will continue to develop and challenge ourselves in the right way.”

Senior Josh Van Lingen isn’t too worried about the first loss. He believes that losing a couple key player from season ago threw the team’s rythem off, but that they are now prepared for any obstacles they might face.

“We have really good team chemistry,” Van Lingen said. “We have a lot of returning players that have experience and the young guys are playing well. I’m looking forward to improving every day as a team.”

For the men’s team, an early loss may be a blessing in disguise because it forced the team to refocus.

Van Lingen plans to finish his senior year on a high note. There have been a lot of ups and downs throughout his playing career, but he believes that the best is saved for last.

“Our team goal is to make the national tournament,” Van Lingen said. “With the experience and team cohesion we have already, I can definitely see us making a run.”

The women’s team also have high hopes for this season.

So far, the women have played a total of four non-conference games. They won all four games, and the team has an average win margin of 38 points.

As the 5th ranked team in the country, the women plan to work hard to move up even higher in the rankings this season.

“It’s really cool that we are ranked 5th in the nation because when I first got here, we were probably around 170th,” senior Payton Harmsen said. “It’s an honor, but we haven’t talked about it much since it shouldn’t be our focus. We understand that we have a target on our back, but it’s all about how we react mentally.”

Harmsen is currently one of the top shooters in the conference and is a seasoned leader for the women’s team.

“Throughout my years here, I never played with a ton of upperclassmen,” Harmsen said. “Us four seniors have had to be leaders since sophomore year, which has been good for us.”

An experienced underclassman, sophomore Jordyn Van Maanen, is ready to take on a new roll this season.

“My role had to change because Annie (Rhinesmith) tore her ACL,” Van Maanen said. “It’s always tough losing a player of Annie’s caliber, but I’ve had to adjust in becoming the starting point guard.”

Van Maanen is shooting an impressive 53% from the field and is second on the team in assists with 10 assists so far. The only player with more assists is teammate Payton Harmsen, who leads with 16.

The men and women’s team will resume play on November 8, when they will both play in Orange City, Iowa.