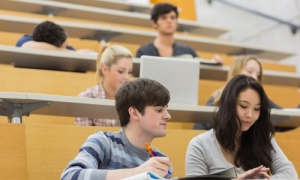 The International Center for Academic Integrity conducted a study in 2015 in which over 71,000 university students were asked about cheating. About 68 percent of them admitted to doing so at least once during their college career.

Despite common student habits across the nation, the Dordt University Student Handbook is quite clear on Dordt’s take on academic integrity, which includes stealing/plagiarizing, cheating, lying/fabricating, and facilitating academic dishonesty.

According to the handbook, “Dordt University is committed to developing a community of Christian scholars where all members accept the responsibility of practicing personal and academic integrity in obedience to biblical teaching.  For students, this means not lying, cheating, or stealing others’ work to gain academic advantage; it also means opposing academic dishonesty.”

According to Mark McCarthy, professor of history in his eighth year of teaching at Dordt, cheating, specifically plagiarism, has become “very easy” with the use of technology.

“When we were in college, we would have to take like 3 hours to find the appropriate articles,” McCarthy said. “…In my day and age, you would have to go to the library, spend time finding sources, manually transcribing the information onto the page. Now it’s just cut and paste.”

Over time, McCarthy has gotten better at spotting “authorial voice.”

“When you notice all of a sudden a major change, it’s, ‘Wait a second, there’s something going on here’ and you start getting curious,” he said.

Robert Taylor, dean of students in his twenty-first year at Dordt, has found that the biggest problem among students is “inadvertent plagiarism,” where students don’t know how to cite properly.

Taylor believes that students only intentionally plagiarize when they find themselves “in a hole, struggling to get something done.” If students put off their work for a long time and do not prioritize properly, they can get to the night before an assignment is due and start panicking.

“They may think, ‘I’m going to fail this paper if I don’t turn [it] in, but also fail it if I get caught cheating,” Taylor said. “However, if the students confess to their professor and say, ‘Hey, I put this off. Is there any way that I can turn this in late?’ Lots of professors are willing to work with the students.”

If students are caught plagiarizing once, only the professor of the class and Erin Olson, professor of Social Work and chair of the Student Life Committee, are made aware.

“The Student Life Committee kind of has a ‘three strikes’ rule,” Taylor said. “The first strike is a warning, the second is a really really firm warning, and the third you have to go home. For a semester probably. There have only been three cases of the third strike that I can remember in all my years.”

At their second strike, Robert Taylor gets involved with the student more personally.

“We have a conversation [with the student] to try to make sure that it wasn’t inadvertent and, if it was, we help them avoid it in the future. Our whole goal is: how do we keep this from happening again?” he said. “Shame is not a part of it. We understand that mistakes happen and when people aren’t at their best, they make poor choices.”

Despite everything that he catches students doing, McCarthy holds an “optimistic sense” of who students are. They are not inherently bad students, but if a simpler way comes up, they will take it.

“Not many kids plan to cheat, but something that lands in front of them and they haven’t thought through everything makes it so much easier for them,” McCarthy said.

Taylor believes strongly in the services that Dordt has to offer and encourages students to be honest about their faults.

“The biggest thing is always being in communication with faculty. If you wonder if something is okay, just ask. Everyone wants to help you avoid a mistake,” he said. “If you utilize the Academic Enrichment Center, they will help with citing, the library will help with citing. Proofreaders can catch potential errors of plagiarism. We have all those services. And just be honest. If you didn’t get it done, don’t panic and do something foolish. Be honest with your professor.”

“Everybody who works here is for you, not against you,” Taylor said. “We want to help you do your best.”