“Why are you putting that in the freezer?!”

Inside the freezer, some students keep not only frozen vegetables and icepacks but also insects.

Every other year, Dordt offers an Entomology course.  One of the biggest projects for the class is collecting a minimum of sixty insects, identifying them, and writing two papers about these insects and their effect on the environment.

This was the third time Dr. Jeremy Hummel has given out the project.  Students in the class were assigned the project in the summer so that students could start searching for different insects during their summer breaks, when the insects are most active.

“Since I started mine over the summer, my family got into all of it, so  they had a competition to see who can get me the biggest bug,” said senior Raelyn Lessen. “It was really fun to see what they could bring me.”

Because students are spread out during summer break, they had some different kinds of insects from each other as well. Senior Joe Schares managed to catch a dragonfly.

“It was really satisfying to catch a dragonfly because they intend to be really fast,” said Schares. “In my case, I found one floating up-side-down in the water, it was really convenient. As it was warming up in my hands and, obviously out of the water, it started to revive, so I had to throw it in the freezer.”

Once the fall semester started, the class continued their search for insects.  Because insects are active, living things, the class got to go out to different locations like the Dordt’s Prairie and Oak Grove to search for more kinds of insects.

“Collecting insects has to be done, basically, at the start of October into the middle of October because once the hard freeze hits for a couple days, all insects either hibernate or die,” Aguilar said.

The class also learns how to ‘kill’ these insects.

Although there are multiple ways of killing these insects, most students liked to use the ‘putting in the freezer’ method. This is where they will catch the insects, put it in a container of some sort, and put it in the freezer for a couple of days until it’s dead.

“Dr. Hummel said it’s one of the easiest ways and it’s pretty humane because it doesn’t suffer a whole lot,” Lessen said. 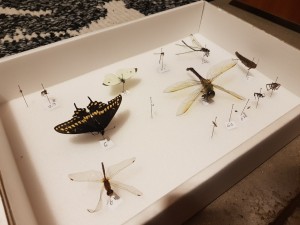 After catching and killing the insects, students then pinned them in a box to identify them. They identified them through the time, date, and location that they have found these insects and order them in by family. This was the part where many students where a little scared of because of the wide variety of the different characteristics.

“Insect taxonomy keeps changing so the classifications are constantly changing. A lot of books get outdated really quickly,” Schares said.

Lessen also mentioned how because of the change of characteristics, they would have to search for more updated resources and also because of the detail differences does make a big difference. The size of the bugs also makes it difficult to  identify the bugs because  they have to use a microscope to identify them.

“The problem with insects is that there is so many, there are lots of technical terms and to try to address all that in one semester [can be] too much.” Hummel said.  “My deepest goal for the project students gaining awareness and more in appreciation for how big the world is, even in a little town where they happen to be in.  It’s actually a pretty amazing place with lots of different things, but you don’t always see it unless you are looking carefully enough.”