In Indianapolis, IN people from all around the country gathered at the Bankers Life Fieldhouse Convention Center to hear speakers, attend seminars, and even attend a few concerts, all hosted by the Future Farmers of America. This conference, the FFA Convention and Expo, is in its 92nd consecutive year. Although the location, size, and schedules have all changed since the conference’s inception, its goal has stayed the same: to help teach America about the importance and necessity of agriculture. 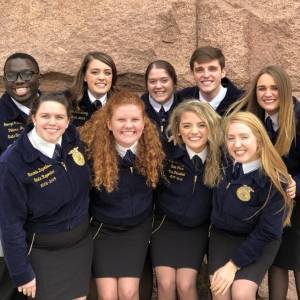 Behind the scenes, Dordt freshman Agricultural Animal Sciences major Gretchen Lee decides the future of this institution. Lee, as a representative on the National Nominating Committee, is part of the voting body that will decide who the next National Officers will be and which position they will hold. The offices up for grabs are four Vice President positions, a Secretary position, and the National President position.

The Nominating Committee, or “NomCom” as Lee puts it, has nine members. Two members represent each of the four national regions—Central, Southern, Western, and Eastern—and one chairperson serves as the head of the committee. Although each state has a different way of selecting the members who they wish to have serve on this committee, Lee was picked by the past National Team out of over 50 candidates.

The Nominating Committee will be working for a week straight to decide who will get to move on to Phase 2 of the process. This decision will be made through rounds of media interviews, personal 1-on-1 interviews, meetings with shareholders, and many more.

“On [October 24th and 25th] we’ll be locked in a room for twelve hours for training,” Lee said, “being taught what to look for in a good officer.”

This year, the pool was cut down from 44 members to 25, rather than to the normal 22, due to some tied scores. Then, after even more interviews, and six hours of deliberation, they emerged at 2:30 A.M. with the final six members chosen. The final split was three boys and three girls, with Kolesen McCoy of Ohio being elected National President, Kourtney Lehman of Oregon as National Secretary, Yomar Roman of Puerto Rico as the Southern Vice-President, Mamie Hertel of Montana as the Central Vice-President, Tess Seibel of Virginia as the Eastern Vice-President, and Lyle Logemann of New Mexico as the Western Vice-President.

Once Lee got back, over a week later, she felt that conference went great. This year, the conference broke another attendance record, with over 70,000 people attending, indicating Lee was not alone in feeling invigorated. This conference is bittersweet, however, as this will be Lee’s last act as an active FFA member. Since FFA is only open to high-schoolers and college-students, Lee felt this would be a good time to leave.

“I feel the conference went great, I voted in a really strong group of individuals and I’m looking forward to seeing what they do in the coming year and how they end up interacting and working together between themselves and others. They paid for our coffee, food, flights; but it wasn’t about the things. It’s really an experience to get emotional fulfilment out of.”