Dungeons & Dragons, commonly known as DnD, is a tabletop roleplaying game. Essentially, instead of watching Lord of the Rings over and over and wishing you could form your own party of adventurers, you can do that, albeit in a different manner than you would expect. 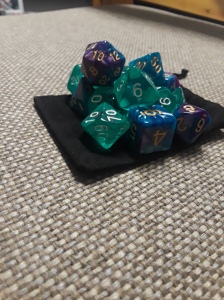 You create a personalized character by choosing a race, a fighting class, and character statistics, then play alongside some friends while another player, known as the Dungeon Master, or DM, guides the others through their fictional world. What happens next is controlled by rolling dice, from a 20 sided die to a 3 sided die, and the Dungeon Master’s own imagination.

DnD has been shunned by the Christian community, and possibly even the world in general. But why?

The game was first seen in a negative light when it came out in the 70s. As the game became popular, many conservative Evangelicals called out the game for allegedly guiding young people to Satanism.

There were a few incidents where the game was taken too far into the real world. Some people got murdered or went missing due to some players losing their grip on reality. But this isn’t exactly a new phenomenon when it comes to games.

Admittedly, the game can include demons and gods as characters, which is heresy, I know. However, these are just characters in a fictional story. And yes, most characters use spells to fight and kill enemies. But, in my opinion, the conservatives of the 70’s blew it out of proportion.

And sadly, those negative thoughts have persisted. A stigma has followed the tabletop roleplaying game, leading some to treat it with caution.

But as someone who plays DnD, none of the things that set people panicked about in the 70s is true. If anything, it teaches socialization skills and empathy, which should be applauded in an age where parents are often worried about a lack of interaction due to media overdose.

Some schools have even begun using the game to get students to ignore technology for a bit. Compared to 45 years ago, the change is mind-blowing.

For a few hours, I can forget about some of my problems, be another person, and hang out with my friends. It’s a way for us to have a bit of fun and learn to communicate with people. We roll the dice, and whatever they land on, we roll with it.