“Thank God each time when you are privileged to sit before the organ console and assist in the worship of the Almighty.”

MaryLou Wielenga, an assistant adjunct for Dordt University’s music department, has this quote by noted music scholar and organist Albert Schweitzer tacked on the bulletin board near the music practice rooms. It speaks volumes to her.

Wielenga began teaching at Dordt 40 years ago when the Casavant organ was installed. 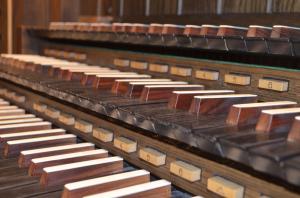 In 1975, Dordt had plans to build a chapel, now known as the B.J. Haan Auditorium. During this time, Dordt was informed that a generous donation from Minnie J. Dahm would be given to purchase an organ for the chapel. Joan Ringerwole, the first full-time organ teacher at Dordt, was chosen to lead the college through the developing this organ.

Beginning in 1976, Casavant Frères, organ builders known for their modern design, was chosen to build Dordt’s organ. Multiple handwritten letters, telephone conversations and arranged dinners led up to the final design of the organ, and in March 1979, the organ arrived to a town covered in about 20 inches of snow.

Originally, Ringerwole had four goals in mind for Dordt’s organ: to lead congregational singing in worship, to have students learn and perform on it, to accompany both choral and instrumental ensembles, and to perform a wide variety of music.

Forty years later, the organ still holds a significant place on Dordt’s campus — even though its role is less prominent.

Dordt has 11 organ students this semester who are being taught by Wielenga and Carrie Groenewold.

Wielenga describes Dordt’s organ as a “powerful, sustaining sound” and a “rich sound for congregational singing. It’s a fantastic organ.”

Senior organ student Pam Regnerus loves that she is able to fill the whole auditorium with sound when she plays.

“It’s just sweet because it is such a big organ,” she said.

Dordt’s organ is a great tool to learn on. It’s a versatile instrument that “works well for most organ literature,” Wielinga said.

The organ students are privileged to have the opportunity to have lessons on the big Casavant organ and practice individually. Many bigger colleges and universities do not have this opportunity. Wielenga remembers being limited to one hour of practice per week on the organ at her college.

Even though 32 students were studying on this organ 40 years ago, Wielenga is pleased that Dordt still draws between 8-12 organ students each semester.

“We are really trying as a department to continue to train students to be church musicians,” Wielenga said.

In addition to teaching lessons and practicing on the instrument, Dordt uses its organ each year for hymn festivals, community worship, choir concerts and guest organ recitals.

However, Regnerus recognizes that people are “not quite as impressed” with the organ today as they were 40 years ago.

The biggest shift has happened in chapel. Four decades ago, chapel worship was led by the organ. Today, worship bands — with drums, guitars, keyboard and vocals — have assumed the more prominent role.

Jon De Groot, director of campus ministries and worship arts, explains that the organ is just a different way of leading worship.

“The organ provides a different flavor,” De Groot said. “When played well, it is incredibly powerful.”

He said songs with organ are “more lyrically driven with meter and rhyme of lyrics rather than by percussion.” He thinks the transformation is less about musical style and choice of instrumentation and more about direction and attention of singing. Hymns are often credal and talk about God in the third person; whereas, modern choruses tend to direct worship up to God in a devotional style.

He compares the organ to taking a carriage ride in New York City. The organ has “an element of classiness to it.” Yet, he noted it is not feasible to take an organ to a campfire or overseas for worship.

“It serves as a heritage or historical reminder from where we came from,” De Groot said.

Wielenga and Regnerus wish for more than that. They would like to see the organ used more during chapel services, as it used to be. She said the organ leads services in a way no other instrument can, calling it “the king of instruments.”

“There is room to do blended music very effectively. I would love to see that happen more,” Wielenga said.

“If others heard it more, they could appreciate it more,” Regnerus said. “It is seen as a boring instrument, but it can really do cool things.”