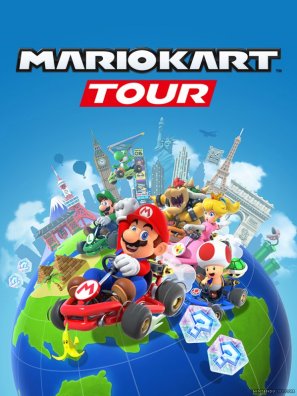 On September 25, Nintendo launched its Mario Kart Tour on mobile app stores. It reached more than 90 million downloads on the first week, making it the fastest growing Nintendo mobile hit.

“Some of my friends and I were the first ones to download the app within the hour that it came out.” Sophomore Jason Enerson said.

Sophomore Acacia Phillips said she found it cool to see the game being put on a mobile platform; one of the major reasons why students are enjoying the game is because of its accessibility.

“Instead of having to get out your Wii and put in the disc, you can just tap on the app and go.” Phillips said, “It is faster in the aspect for our world today, so that’s nice.”

Besides being drawn in by the ability to take it anywhere and the ease of play, it is also a way to compete with one another.

Phillips and her roommates often come together to race each other and their friends from back home. However, even though there is a multi-player mode, it randomly selects the players, so Phillips and her friends would just add-up the scores in the end.

“Whoever has the highest score for that cup is the winner.” Phillips said.

Enerson also mentioned how he plays the game with his friends as well.

“It’s easier because everybody has a phone.” Enerson said.

Despite the easier accessibility of the new app, many students still say that the Wii or DS version is better than playing it on their phones.

“It has more laps and more variety of courses on the Wii. On the app the courses are altered and they get repetitive after playing it for a while.” Phillips said.

Even though the app itself is free, there are items and characters that require purchases. This is a source of frustration for many students as these purchases make it easier to win.

Despite this, students still enjoy the app and most of them say they will continue using it to kill time, relax in-between classes, have some fun before work, or as a study break. A few students expressed concern at getting too addicted to the game, but most say that it is not too addicting…yet.