At 5:00 pm on Monday, September 30, the Sioux Center Pizza Ranch started filling with hungry people who came to support Delilah Cosgrove. People of all ages with teal t-shirts reading “A Dog for Dee” wandered around, smiling, talking to customers, and grabbing empty plates from tables.

The Community Impact Night, more commonly known as Tip Night, was organized in order to support Delilah Cosgrove, adopted daughter of Walker and Kirsten Cosgrove, in her quest to get a service dog.

Many who had Professor Walker Cosgrove for CORE-140 may recognize Delilah from the stories he tells about her, the pictures he shows of her, or the times when she is present in class. She is a bright, energetic 11-year-old who loves animals and playing games. However, she also has struggles in her day-to-day life.

“She has a disability and the easiest way to explain it is PTSD,” Kirsten said. “She has experienced complex early childhood trauma. This is a big umbrella for a lot of things that she has gone through with her birth family and foster families.” 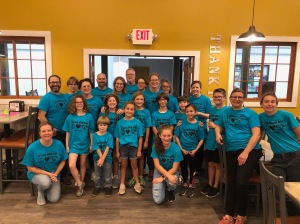 Delilah, affectionately called Dee, is getting a service dog.

“We know that a service dog will give her more independence and help her to live with the challenges that she has,” Kirsten continued. “She is getting older and it’s one thing for us to always bridge the gaps for her, but she is also getting old enough where she needs to keep growing independently as well.”

The Cosgroves will be there for two weeks and engage in training every day of the week.

“We are in a cohort of other families receiving dogs so with the group we will all be learning,” Kirsten said. “For me, it will be learning everything. We will learn how to be a dog handler and we will do public access training as well.”

They will go with their dog to restaurants, grocery stores, and the mall. The family will get real life experiences with trainers who help every step of the way. The Cosgroves will attend training sessions with other families who are getting dogs and will have hands-on opportunities to learn what they will experience with a service dog.

When asked about how she was feeling about everything, Kirsten laughed nervously and said, “We have a lot to learn. There are lots of others that could benefit [from a service dog] as well. It is just a really special opportunity.”

Both Kirsten and Walker Cosgrove were deeply affected by the Tip Night. “We always know the community is there,” Kirsten said. “We know that people would help but when we actually reach out for support and they actually do help, it really means a lot.”

Kirsten mentioned that, in her own way, Dee was deeply affected by the tip night as well. She told the story of how, at the end of the night, they counted all the money and found an envelope with some folded paper in it. When they opened the envelope, they found a drawing of Dee and a dog, a five-dollar bill and one-dollar bill, and the words, “I hope this money helps you get your dog!” This note was from two little boys from the church they attended that Dee didn’t know very well.

“I told Dee that these little boys could have taken that $6 and gotten a stuffed animal like you like to do, but they chose to give it away to you so that you can get your dog,” Kirsten said. “It was a cool illustration to show her and I think it deeply impacted her.”

“Our first fundraiser was through Facebook. The reach was so far and wide—friends of friends of friends donated. This was the flipside,” Kirsten said. “It had such a closer-to-home feeling of fundraising. I think that’s really cool. Both were exactly what we needed.”

The Tip Night at Pizza Ranch was very successful for the Cosgrove family and brought in a gratifying sum of money for their service dog.

“The support that people have helped us fundraise means a lot,” Kirsten said. “We couldn’t have done any of this if we didn’t have people helping us.”