Space travel is a stressful job, even in the future. It’s a battle for survival against the forces of nature. One wrong move could kill you. Keeping a level head is key. That’s why Major Roy McBride is the best at what he does. 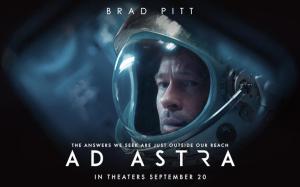 Those seeing trailers for Ad Astra will undoubtedly see the film as some kind of hard-sci-fi space epic, like Interstellar or The Martian. It isn’t. It isn’t even a drama or survival movie set in or around outer space, like Gravity or First Man. Ad Astra is a character study of Roy McBride.

McBride is the epitome of stoic. He’s a legend among his superiors for having an impressively low resting heart rate, even in the worst conditions. Roy is the ideal astronaut: mission-driven, calm, and competent. But, when dangerous power surges begin to wreak havoc on earth, Roy is thrust into completely unfamiliar territory.

Supposedly, the surges originate from an old project base in Neptune’s orbit. Project Lima, led by Roy’s genius father, Clifford, was thought to be missing. It has been sixteen years since communication between Lima and Space Command mysteriously ceased. Space Command is sure that Roy’s father is alive and causing trouble. They want Roy to travel to Mars to try to re-establish contact. Roy immediately agrees. To him, it’s just another mission.

McBride has internalized his emotions. They have no place in his job and, thus, no place in his life. His marriage is on the rocks, and he looks down on his more outgoing, vulnerable co-workers. Roy has no time for distractions.

Roy’s only clear emotional attachment is to his father. Roy admires his father and aspires to reach the same explorative and scientific heights. But, as Roy’s journey continues, his father’s darker side is revealed. As Clifford’s sins become more evident, Roy’s emotions do as well, resulting in a climax that isn’t so much exciting or intense as it is cathartic. Viewers hoping to see a dramatic showdown or tense escape will find neither here, and that’s bound to be disappointing for some.

Director James Gray crafts an aesthetically beautiful universe for the film, giving us some of the most impressive and realistic looking space travel footage in cinema, period. Nothing looks computer generated, and nothing looks miniature. Shot on 35mm film, the visuals have a gritty, tangible feel to them that helps to sell the near realism of the film. Hoyte Van Hoytema’s cinematography shines as well. Each new planet Roy visits has its own color scheme that fills the frame. The moon is a silvery white, while Mars is a dusty orange. Neptune is blue, but it’s also black—connoting both the dark events at the Lima base and Roy’s ever-darkening image of his father.

Brad Pitt as Roy McBride is fantastic. Pitt has been on a roll this year, following up a career-defining performance in this summer’s Once Upon a Time in Hollywood with yet another one. Pitt’s stone-faced stoicism slowly melts throughout the film. Pitt’s squinted eyes and clenched jaw are constantly at war with his inner self. Roy McBride’s face dominates most of the screen in Ad Astra, and Pitt is aware of that, emoting (or not emoting) to a pitch perfect tee.

As stated before, some might be disappointed with this film. Those buying a ticket for a space adventure with buggy chases on the moon and a stone-cold hero will be disappointed. This movie isn’t for everyone. Some might find it boring, while others might find its perspective pretentious. While these opinions are valid, when the credits rolled and the lights came up, I found Ad Astra to be a moving, beautiful film.