A subdued crowd gathered together in the B.J. Haan Auditorium on Wednesday to remember and celebrate the life of David Temte. On June 24th, David and his twin brother Benjamin died in a car accident on a Montana highway while road-tripping out West.

Muffled murmurs filled the auditorium as students and faculty filed into their seats to observe, mourn, and pray with one another during the service. As pictures of David flashed across the projector screen, the audience fell silent. A shaken Gary Temte took the stage after seeing his two sons on the monitor. 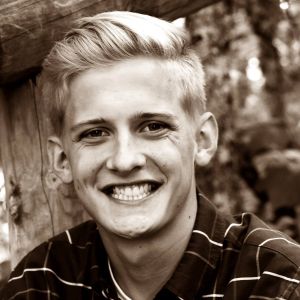 “This might’ve been a mistake,” Gary addressed the crowd with a smile, “But we’ll get through it.” Some much-needed laughter and smiles finally broke out across the pews. Gary then gave testimonies about the two. He shared the account of a camp counselor who had worked closely with Benjamin. The counselor spoke of Ben’s ability to bring joy and inclusion to children with special needs. He then went onto highlight a story from one of David’s coworker at Starbucks. David had always found a way to bring happiness to the workplace and offer those around him support.

The impact and loss of David has sent shockwaves of grief across Dordt University. David’s bright and vibrant personality made lots of friends and connected many people in the community.

“He was guy who was very free with his friendship,” reminisced Nate Wolf, Dordt’s head cross country coach who recruited David into the program, “And I think we need more people like that. He was pretty free with the way he loved.” He also highlighted David’s ability to bridge the gaps between people, both in the classroom and with cross-country teammates.

One particular moment that sticks out in Wolf’s mind occurred the day before a meet. David had tweaked his back and Wolf wasn’t impressed. According to Wolf, he got on David’s case about taking care of himself and making sure he was there for his teammates. Although not a particularly pleasant conversation, Wolf said David ended things by hugging it out with his coach and telling him he loved him. That was David.

Among the people feeling his lost the heaviest are David’s parents, eight siblings, and Mikaela Van Soelen. Van Soelen had been close friends with David for a year and a half. They dated for five months.

“Every time I would hang out with him, I knew I was going to smile,” Van Soelen reflected, “He was so intentional with the way he interacted with other people and making sure other people felt loved.”

Mikaela added how complex David was as a human being and how she had changed as a person as their friendship developed. The biggest thing that David taught her was how to live and love in every single moment.

Gary and Kris Temte, although feeling tremendous pain and loss, feel it is important to share stories and keep in touch with the community.

“It was mind-blowing news, but we were doing fine as far as not being upset or mad,” Gary said, “We wanted to share with others, we ultimately realized we had time for friends and neighbors to stop by. It was important for them too.”

Anyone and everyone who knew David would tell you he was all about living life passionately and to its fullest potential. Tom Prinsen, David’s public relations professor and mentor, reflected on David’s impact and attitude. “He lived in the real world…He was living his life in earnest. He wasn’t waiting around.”