Twenty-seven years have passed since the events depicted in the 2017 film IT, and the Losers Club has moved on. Most of them can’t remember much of the adventure they had on the cusp of their teen years in their hometown of Derry, Maine. Bill, Richie, Stanley, Eddie, Ben and Beverly have all grown up and moved on to successful, albeit unhappy, lives.

Mike, the orphan outsider who fell in with the Club that fateful summer, remains in Derry, and still remembers that summer of 1989. The summer where this ragtag group of kids banded together to defeat the creature they would call IT: a shape-shifting, child-feasting demon who often took the form of a dancing, cock-eyed clown named Pennywise. Now, Pennywise is back, and he’s ready for the Losers’ return. They’re the meal he never got to finish. He’s waited for them, and, as he says, he’s missed them.

Stephen King’s novel IT is a long book. At over 1100 pages, it’s an intimidating beast to adapt into a film. With this in mind, Warner Brothers decided that the adaptation could be best made and sold as a two-parter. This wasn’t a purely economic choice but also a necessity. 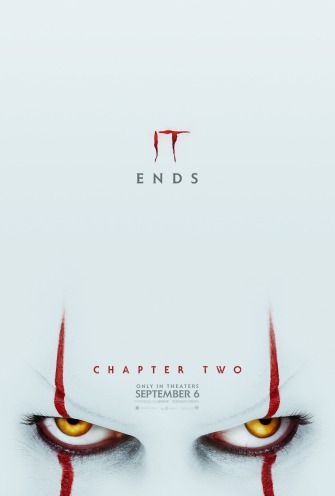 King’s novel splits its narrative between two time periods: The pre-teen Losers fighting Pennywise and their early-middle-aged counterparts returning to finish the job 27 years later. 2017’s IT took on the first period, creating a fun, Stranger Things-esque tale about coming-of-age and overcoming one’s fear of the unknown, with a killer demon clown thrown in for good measure.

Rather than a fear of the unknown, IT: Chapter 2 tackles the fear of the known. Each member of the club knows what they’re up against, but they’re still hesitant to fight. Doing so will undoubtedly bring back memories and trauma they’d rather not face again. The past is the past. But the past isn’t done with them. In this thematic area, IT: Chapter 2 really shines. We see how the past literally haunts the Losers, both in the form of frequent flashbacks to the summer of ‘89, and in the form of Pennywise’s devious taunting.

But these flashbacks have a cost. Much like the original book, IT: Chapter 2 is lengthy, and, unfortunately, sometimes feels longer than its 2 ½ hour runtime. When the Losers split up to explore Derry in the second act, the film becomes disjointed and unfocused, devolving into a predictable series of easy scares and obvious character notes. It only comes back together in the final half-hour or so, in which the Club regroups to take on the monster once and for all.

Casting the adult Losers is the lynchpin of this film. The child actors who made up the Losers Club in the first movie had an undeniable chemistry, bouncing playful jabs off each other at a lightning-fast pace. This movie needed actors who could bring the same energy, but in a more adult context. Big, bankable names were needed to play the more serious members of the Club, so Warner Bros. brought in James McAvoy and Jessica Chastain to fill the roles of Bill and Beverly, respectively.

Casting the rest of the Losers was a gamble, but in the end, it pays out beautifully. James Ransone, as an adult Eddie, is a carbon-copy of his younger self, down to the awkward tics and rapid-fire speech. Jay Ryan as Ben and Isaiah Mustafa as Mike bring the same heart that their “younger selves” did to the original movie, but with a more mature air that balances out the humor and trauma the rest of the club exude.

Finally, Richie, originally played by Stranger Things star Finn Wolfhard, is expertly brought to life by former SNL cast member Bill Hader. Hader, a comic genius (who only recently has been able to flex a surprisingly strong dramatic muscle), is a revelation as the adult Richie. He hides deep insecurities behind a mask of insults and quips that not only serve as comic relief in an often serious and dark film, but also as substantial character development. Hader is the heart and soul of the adult Losers, and the movie emphasizes it by giving him the time to shine.

IT: Chapter 2 is a serviceable and adequate follow-up to 2017’s IT. It displays a decently engaging and scary continuation of the story, with amazing performances from Bill Hader and the rest of the adult Losers. However, its unfocused plot and dragging runtime keep it from ever floating to the heights it could’ve reached.