Across the Midwest, the intense snowstorms of winter caused high anticipated for the arrival of spring and warmer weather. However, the rising temperatures wreaked havoc across the state of Nebraska.

This winter brought record-breaking snowfall to the Midwest. However, when spring came, built up snow started to rapidly melt, and warm rain fell. The combination of melting snow and rain became dangerous as the soaked plains began to fill with water.

Farmers and ranchers were hit the hardest. Their fields turned into lakes, and cattle were isolated in the treacherous floods. Many cows gave birth in the hazardous weather, resulting in a loss of countless calves.

Over spring break, Nebraskans prepared their houses by sandbagging, moving furniture upstairs and watching weather reports. One house sitting at the base of a hill had water seep into the kitchen and living room. Many families did not have such an opportunity to prepare, and entire homes were swept away by the floods.

National media outlets were slow on reporting the floods. Luckily, that changed on March 15, when President Trump tweeted, “The people of Nebraska & across the Midwest, especially the Farmers & Ranchers, are feeling the impacts from severe weather. The first responders & emergency response teams have done a great job dealing w/ record flooding, high winds, & road closures.” After this, the national media began reporting the floods. 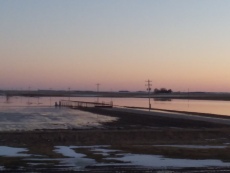 Out of the flood come stories of redemption. Across the flat plains rise a strong and generous people. Story after story came up of strangers helping one another. A police officer rescued a frozen calf. Farmer James Wilke lost his life in a tractor attempting to save a stranger. Stories like these show the resilience and kindness of Nebraskans.

There is no doubt that Nebraskans will rise from the flooded fields.