Although March 20 marks the official start of spring, nothing quite signals the change of seasons like the opening weekend of March Madness. The electric atmosphere of the survive-and-advance tournament awakens the earth from its wintery slumber.

Over 50 million Americans will fill out more than 70 million brackets this year and bet more than 8.5 billion dollars on their college basketball knowledge, according to the American Gaming Association (AGA). Dordt Dining is sponsoring a campus-wide March Madness bracket again this year with a TV as a grand prize. From the First Four to the Final Four, an approximately 97 million Americans tuned in during the three-week tournament last year. March Madness brings together sports fans and non-sports fans alike with a power at par to the Super Bowl. 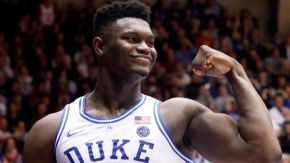 Perennial powerhouse Duke stands as the favorite to win the tournament with 11/5 odds. Although the Blue Devils lost three of their last six games without an injured Zion Williamson, the highly-touted freshman returned for the ACC Championship to defeat fellow 1-seed North Carolina. Other popular picks to win it all include 1-seeds Virginia and Gonzaga, and 2-seeds Kentucky and Michigan State.

Fresh off Big 10 regular season and tournament championships, many experts believed Michigan State to be a favorite for a 1-seed. However, despite possessing the most Quadrant 1 wins in the country, the Spartans were given a 2-seed in Duke’s bracket.

Controversy aside, the opening weekend of March Madness is slated to have some exciting storylines. Following the Tuesday and Wednesday play-in games, action tips off at 11:15 a.m. on Thursday with 10-seed Minnesota facing 7-seed Louisville. Thursday also showcases the matchup between Ja Morant’s Murray State Racers against Markus Howard’s Marquette Golden Eagles. The two guards have exhibited some of the most explosive play seen this season, and their faceoff promises to be arguably the best of the tournament.

On Friday, Virginia looks to bounce back from their historic loss to 16-seed UMBC last season with a matchup against Gardner-Webb, another 16-seed.

Early predictions for Cinderella teams include 7-seed Wofford and 14-seed Yale. The Terriers boast a 20-game win streak led by senior guard Fletcher Magee, who is poised to break the record for made three pointers in NCAA history. For Yale, the Bulldogs are looking to continue their momentum from defeating Harvard in the Ivy League championship and upset an LSU team plagued by distractions from allegations against their coach.

As a gentle reminder, the odds of picking a perfect bracket are 1 in 9.2 quintillion.