The Dordt women’s volleyball team ended their season with 1-3 loss to Columbia in the quarterfinals of the NAIA National Tournament.

Dordt came out swinging in set one with a 25-20 victory. The Defenders recorded a .414 kill efficiency in the set and looked to be in control heading into set two.

The lead was short lived as Columbia adjusted and won the second set 25-22. The Cougars would go on to dominate the third and fourth sets to win the match.

Ema Altena ended her final match as a Defender with 18 kills and a .556 kill efficiency. Aubrey Drake had two service aces and 12 digs in the last match of her career. 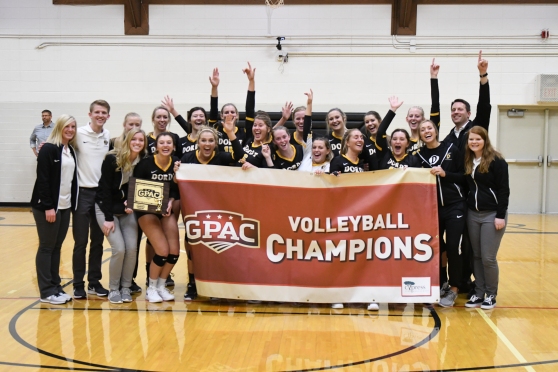 While the loss came as a disappointment to the team, especially the six seniors playing the last match of their careers, Coach Hanson was proud of the way that the team battled to the end.

“I’m so blessed and pleased with how this team stayed together,” Coach Hanson said. “[They] stayed united and stayed competitive, pushing and fighting for extra points.”

The match ended a Dordt season in which the Defenders went 31-3 overall and undefeated in conference play. The Defenders won the GPAC and the GPAC tournament.

For six seniors, their volleyball careers came to an end in the loss to Columbia. Over their time on the team, they posted a 118-26 record and two national runner-up performances in the NAIA National Tournament.

“To have this type of success on the court is a blessing,” senior setter Robyn Underwood said. “[It] makes me look back and say, ‘Wow, we did that.’”

The bond between this senior class is undeniable. They have been together through the ups and downs of four very successful seasons.

“We all love each other so much,” senior middle blocker Leah Kamp said. “Not only do we love playing with each other on the court, we are all really close off the court.”

While this group of seniors has been a key part of the program’s success over the past four years, they recognize it would not have been possible without Coach Hanson.

“He believed in us over all of these years,” Kamp said, “and was patient with us as we had to grow into the players and the leaders we are today.”

As these six seniors end their volleyball careers, they will focus on finishing their degrees and getting ready to make an impact in their respective fields.

“As I become a teacher,” senior outside hitter Julia Lindbergh said, “I am excited to work with many different people and try to be a blessing in all of their lives.”

Volleyball has taught these women life lessons they will cherish forever. As a student-athlete, one quickly learns how to manage time and remain patient despite the hills and valleys of a season.

“I think the most important thing is that, if you really do something with all of your heart and do it for the glory of God,” Kamp said, “you will be blessed in the end, no matter what the outcome.”

With that approach, this group of seniors not only demonstrated their tremendous ability on the court, but also their excitement to lead in whatever capacity God calls them to in the future.