Witnesses say Jameson slammed his cigar-free hand loudly on his desk, right before putting forth his demands: “I want photos of Spider-Man!” he shouted.

Amidst his incoherent ramblings, bystanders were able to make out a few words about how Spider-Man was a “criminal” “vigilante” and “a public menace”

When Freshman journalism major Peter Parker offered Jameson a stack of 10 photographs of the masked hero in an attempt to appease him and calm his nerves, but Parker was dismissed after Jameson described the pictures as “crap” “crap” and “mega-crap” 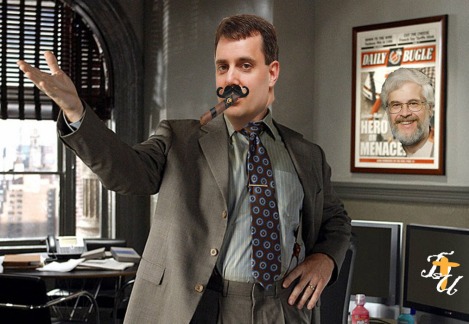 All staff photographers were fired shortly thereafter, and insiders reported that Jameson spent hundreds of dollars of the Zircon budget hiring local kids with disposable cameras as replacements.

“I should’ve known something was wrong” said senior and Zircon staff writer Eddie Brock. “Last year, instead of getting scholarships, we were all paid in Christmas baskets. When we confronted him about the lack of proper payment towards staff, he just cackled loudly and told us to get out of his office.”

It seemed all hope of restoring order in the editing room was lost. That is until one student handed Jameson a cheap, worn out Spider-man costume.

“He must’ve given up” Jameson said with a smile on his face. “I finally got to him. The power of the press triumphs”

After Jameson calmed down, reporters were able to confiscate the stacks of pill bottles on his desk that were supposedly prescribed for a blood pressure problem.
Students made repeated attempts to contact Jameson’s wife, but when Jameson refused to take any further calls, the writing room was shut down for the rest of the evening.

A few hours later, the building Janitor noticed Jameson alone, locked in his office in the back of the dimly lit room. He was donning the same Spider-Man suit from earlier that day. A single tear streamed down his face.

“It’s all my fault” he was heard mumbling. “I drove Spider-man away”

When the janitor approached the door and asked Jameson what was wrong, he sat in silence for a few moments before speaking:

“All I wanted” he said “was pictures of Spider-Man”