As Dordt makes the change from college to university next spring, academic changes are also in line.

For the 2019-2020 academic year, Dordt plans to introduce the “Dordt Dictionary.” The Dictionary, written and compiled by The Office of Academic Affairs, contains six words and four phrases integral to Dordt’s educational experience. The words include “shalom,” “kingdom,” “co-create,” “worldview,” “redemption,” and “university;” while the incorporated phrases are “Christ-centered renewal,” “creational mandate,” and “student engagement.” 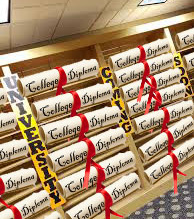 Additionally, the Dordt Dictionary will replace all required textbooks for Dordt students. Provost Eric Forseth claims that the Dictionary condenses all the necessary materials found in Dordt’s various textbooks into one single document.

“There is no need for textbooks such as Introduction to Biology when we have the Dordt Dictionary,” Forseth said. Upon announcing the Dictionary’s release, Academic Affairs released this statement: “Here at Dordt, we seek to embrace the 21st century ideal of progress and cutting out the middle man by eliminating the ‘middle man’ of multiple textbooks entirely.”

While Dordt’s decision has been somewhat controversial, the move has received support from students. Among the supporters is junior engineering major Tom Morrow, who said, “I love it. Instead of forgetting all seven of my textbooks for classes, I only forget one!”

However, other students have met the Dictionary’s release with skepticism as some nursing students are wondering how the Dictionary will help them learn complex medical procedures. Academic Affairs says they are looking into this possible problem.

The Dordt Dictionary will be available for purchase on May 13, 2019 – the same day Dordt will officially transition from college to university – and can be bought in either paperback or hardcover. Additionally, students will have the ability to purchase a special edition Abraham Kuyper version of the Dictionary, containing cover art of Abraham Kuyper, as well as quotes from Kuyper interspersed throughout the book. Academic Affairs lists Kuyper as one of their largest inspirations for the Dordt Dictionary.