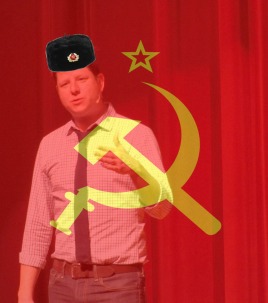 It may come as a surprise to a few in the Dordt community, and confirmation for most, that Aaron Bart, Dean of Chapel, is a Russian spy. This news was recently leaked by The New Yorker following a recorded conversation between Baart and the White House.

On Thursday of last week, House Speaker Paul Ryan insinuated that actions would be taken regarding this leaked conversation. No one from Capitol Hill is answering questions regarding the allegation of Bart’s dealings with the White House.

Baart enthusiast, Dordt senior Karina Macke said, “I’m certain that this is all an attempt for Baart to infiltrate the White House, and to bring Washington to its knees—sending a ripple affect across the nation that reminds all that God is great! He would never actually have dealings with Russia.”

A few weeks ago, the Russian National Anthem was played before a Dordt women’s volleyball game. No one is certain who is responsible, but one student who wishes to remain nameless says, “I was working the scoreboard, and we couldn’t find the recording of the American National Anthem. That’s when a familiar voice handed me a phone and said ‘play this.’ Thinking it was a staff worker I plugged it in—the Russian National Anthem started playing. I can’t say for certain that it was Aaron Baart, but from behind I noticed he had spiky hair, a bomber jacket and skinny jeans.”

A few reporters from the school newspaper have tried to reach out to Baart to dispel any belief that he is a Russian spy, or maybe to gather enough information to prove that he is—because a spy would never tell you they were a spy, even if they were a preacher: thou shall not lie.

With pressure from both Washington and the Dordt community, Baart’s secretary conveniently sent out a school email stating that Aaron Bart has recently lost his voice, and he will not be able to meet with or talk to students or faculty until further notice.

For this upcoming chapel, Baart will be accompanied on stage with junior Matt Benardis, who last spring impersonated Baart at the talent show. Baart will still be mouthing out his words, and making dynamic gestures with his hands, but Benardis will be the one speaking on behalf of Bart.