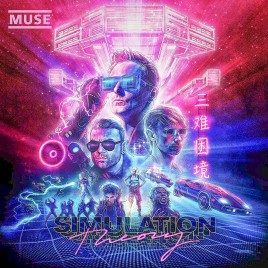 Alternative rock group Muse is known for experimenting on their records, and Simulation Theory is no exception. Muse started as a straightforward, alternative rock band, and eventually adopted a “space rock” sound with their fourth release, Black Holes and Revelations, which had more prominent synth use.

This experimental trend has progressed over the years, with operatic The Resistance, poppy The 2nd Law, and the hard-rocking Drones. Simulation Theory has its own flavor, drawing heavy influence from the 80s, and driven by synths.

Sonically, Simulation Theory sounds like Muse tried re-writing the soundtrack to “Ready Player One” into a pop song. To help smooth the transition, Muse tries to borrow ideas from previous works, such as “Propaganda” and “Dig Down,” taking from Muse’s radio hit “Madness.”

Different ideas collide, and despite strong variety, the final result is an album filled with weak tracks and no identity outside of its 80s obsession.

Synth use is not out of the ordinary for Muse, as it has played an integral role in some of their past work. What isolates Simulation Theory from the rest of Muse’s discography is a lack of guitar and presence from drummer Dominic Howard and bassist Chris Wolstenholme.

Muse has always been a band noted more for their individual work as opposed to their albums on a whole. Even on their best albums, Black Holes and Revelations and Absolution, weak spots exist, but so do killer tracks, such as “Knights of Cydonia,” “Map of the Problematique,” and “Hysteria.”

Thematically, Simulation Theory follows the idea of living in a simulation and the need to break out. Boiling it down, it’s typical Muse fare: the theme of resistance.

Muse’s 2015 release, Drones, tackles the same idea, except instead of a simulation, the concept is being a “drone” to be controlled. Muse even has an album called The Resistance; at this point, it’s a trope of the group.

The lyrics carry the message in a simple fashion. Granted, previous Muse releases also have had problems with non-noteworthy lyrics too. However, because there was not a forced tongue-in-cheek theme, older lyrics had more intrigue.

Opening Simulation Theory is “Algorithm,” a synth heavy track that spends the first minute and half of four on what could have been the opening theme to a “Tron” TV show. True to fashion, what few lyrics “Algorithm” has are heavy-handed messages about enslavement and rebellion.

Not everything is as thematically forced or synth driven. “Pressure” is guitar driven and feels lighthearted in comparison to other tracks. It almost feels out of place on Simulation Theory, and aside from its bouncy feel, “Pressure” sounds like it could be a cut from Absolution.

Other songs lack solid structure, like “Thought Contagion,” which revolves around a theremin and chant chorus hook. The rest of the track is barebones, as the band couldn’t seem to come up with an idea to compliment the hook. The end result is a repetitive overuse of the hook.

And that’s the overall problem with Simulation Theory: the good ideas are too few and too far between. Muse have proven themselves capable in the past, but in this case, they missed the mark.