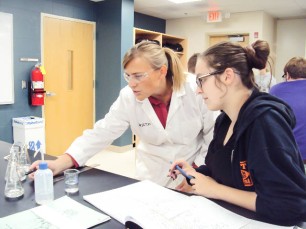 Professor Holly De Vries is another new Dordt professor that originally hailed the halls of Dordt College. She grew up on the east coast of Nova Scotia, Canada, and attended Dordt for her undergraduate degree, graduating in 2000.

De Vries received her undergraduate degree in animal science. After graduating, she took a gap year and worked at the Dordt Dairy, currently known as the Agriculture Stewardship Center. She attended Iowa State University for vet school. Following graduation, she returned to Sioux Center and worked as a veterinarian until this year when she accepted an adjunct position in the chemistry department.

De Vries said that she has always wanted to return to Dordt and teach. She did not know when it would be a possibility, but she returned sooner than she thought she would.

“I thought that maybe the door to work at Dordt would close and not open again, but maybe it would have,” De Vries said.

When she found out about the open position, she decided to go for it and apply.

De Vries teaches the Chemistry 101 lecture, along with two lab sections, with a total of thirty-four students. The maximum for this class is forty-eight students, so De Vries said she enjoys having fewer students in her first year of teaching.

It is a very different style of teaching than when she was a student. She remembers professors lecturing for fifty minutes, writing everything down, and then leaving. Group work and discussion were not incorporated into many classes. Now, there are programs such as POGIL (Process Oriented Guided Inquiry Learning) and Plicker which allow students to discuss and answer problems together. This allows her to walk around the class and see what concepts students need help understanding. She also encourages students to try to explain ideas to each other.

“It’s a really good way to do it. You never quite know if it is clicking or not if they’re just listening,” De Vries said.

The students have been able to work on lab projects that do not just focus on chemistry, but also are applicable to real-life scenarios or even to their actual major, as most students are not chemistry majors. She said that having such a wide variety of students makes teaching more interesting.

“The students come at it from a different viewpoint of ‘how am I going to use this for my future?’ It’s not just about chemistry. It’s about developing skills that you’ll use beyond in your future jobs,” she said.

De Vries tries to incorporate problems on her exams for each of the different majors. Learning the math and conversions may not seem important to someone, but when placed in a real-life scenario for their future career, this helps students see the importance. Animal science is her main field, and she hopes to teach a class in this at some point. She said that even though she is teaching a different topic than her original study, she is still working with the students that she wants to teach.

“Chemistry is everything. The more you study it, you realize that this is the foundation and is used in so many fields of study,” said De Vries. “It’s a building block.”