According to the Academic Affairs Office, 78 percent of full-time faculty at Dordt have a doctorate or terminal degree. What is it like to get a doctorate, and why would anyone want to?

“There are benefits professionally. In terms of the teaching world, that’s one way you can move up,” said Kari Sandouka, computer science professor. Sandouka is working towards getting her Doctor of Science (D.Sc.) from Dakota State University.

“My number one strength according to StrengthsQuest is learning,” Sandouka said. She mentioned she has always had an interest in learning and the benefits that come with that, yet she never foresaw herself getting her doctorate.

However, after graduating with her bachelor’s degree, Sandouka had interest in obtaining her master’s, and the company she worked for covered the cost. An additional incentive was that having a master’s degree was a way to receive a promotion.

It was only when Sandouka began teaching at Dordt seven years ago that the idea of getting a doctorate showed up on her radar. Having finished her coursework, she is now in the phase of working on her dissertation.

Sandouka’s doctoral research is about large quantities of data, as well as methods to “correctly” display and visualize such data.

“If we can’t do it with a simple Excel table and 20 rows of data, how are we going to display big data with millions of data records?” she asked. She said no one knows how to use charts properly.

Sandouka added that Dordt wants its professors to obtain their doctorate and is supportive of those doing so. For Sandouka, this meant having her teaching load reduced by 75 percent and being given space to get away to focus on her work.

“I can’t walk down the hallway passing the Provost or the President without them asking how the degree is going and how the work/life balance is going,” Sandouka said. “They’re encouraging, and they want you to succeed.”

Dordt is even willing to grant faculty sabbaticals to complete their doctorate work. Choir director Ryan Smit will be one such recipient as he works on his Doctor of Musical Arts (D.M.A.) from North Dakota State University.

“A D.M.A. is a little more focused on performance. The culmination of that degree will be a couple of performance recitals and then a smaller dissertation that goes along with those recitals,” Smit said.

As for his dissertation, it is still up in the air as to what it will be. With this year being his second at Dordt, he has only recently committed to obtaining his doctorate degree, which will take him about five years to complete. He plans to do coursework over the summer.
Unlike Sandouka, obtaining a doctorate has always been a goal of Smit’s. “I’ve always wanted to reach that level and earn what they call the terminal degree in my field,” Smit explained.

While Smit always has had an interest in obtaining his doctorate, the idea cemented itself after he obtained his master’s, which he got right after his bachelor’s degree. “I knew I needed to teach for a while and get some experience before I went back for a doctoral degree,” Smit said.

Smit acknowledges the expectation of faculty to obtain their doctorate at some point during their tenue, but it does not bother him since it has been a career goal for him. He is excited to begin his work and appreciates Dordt’s encouragement and support through covering costs and time off to complete the degree.

Another professor pursuing their doctorate is Mary Beth Pollema, an education professor. In terms of getting her doctorate, her story is somewhat of a hybrid of Sandouka’s and Smit’s. 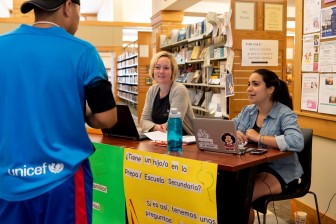 Photo by Dordt College; Professor Pollema and student Jaz Mendieta Gauto interview a man about his perspectives on schooling.

“I always loved school and I always loved learning, so I was never opposed to it,” Pollema said. Once she started teaching at Dordt five years ago, the opportunity materialized and fully became an interest.

Pollema is currently pursuing her Doctor of Education (Ed.D.) from the University of Nebraska. She is preparing to take her comprehensive exams. Once completed, she can then begin to work on her dissertation.

Pollema’s thesis is “Latino Perspectives on Family Engagement with Schools.” The issue she is looking to tackle is the problems schools have in connecting with Latino families.
Previous research has shown that if parents are involved in their children’s education, children set higher goals and perform better.

“That seems to be a real challenge for the schools to do that with Latino folks,” Pollema said. She hopes her research will uncover barriers schools face when trying to involve Latino families.

“I think the primary thing I want to get out of it is a better understanding of how the Latino families view engagement,” Pollema said. She believes Latino families want to be more involved with school, but there needs to be common ground between both sides to get to that point.

To conduct her research, Pollema hopes to survey up to 20 Latino families to get their perspectives on the issue. She says Dordt helped make it possible with graduate study grants and funding.

“The encouragement from fellow faculty members and the department in helping me accomplish these goals has been just wonderful; it’s really made it possible,” Pollema said. If all goes well, she hopes to be finished in a year and a half.