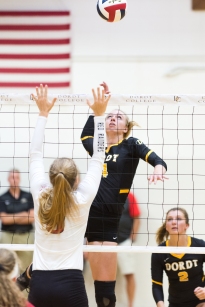 The Dordt volleyball team continued their dominance in the GPAC this weekend with wins over Hastings and Doane.

Dordt opened the weekend with a home match against a ranked Hastings team on Friday night.

The Defenders would get off to a good start with 25-11 victory in set one, but Hasting’s would respond with a 23-25 victory in the second set.

Ema Altena lead the Defenders with 18 kills and Ally Krommendyk finished with 17 kills on the evening.

Dordt would improve to 7-0 in conference play and 13-2 overall.

“We came out really strong and played very focused,” head coach Chad Hanson said. “The growing point came for us in the second set when we got back on track with taking care of our individual responsibilities.”

With one win on the weekend, the Defenders would head into a matchup against the Doane Tigers on Saturday evening at the DeWitt.

The Tigers would prove no match for the Defenders as Dordt started off with a 25-23 victory in set one and a kill efficiency of .432.

Dordt would go on to win the second set handily by a final of 25-13. Up two games to none, Dordt had to hold off a late Doane rally in the third game that had the teams at 23.

However, back to back kills by Ema Altena would give Dordt the 25-23 advantage and the sweep of the Tigers in three games.

Leah Kamp led the team with nine kills and Jessi De Jager had seven kills in the match.
With this victory, Dordt would keep its undefeated record in GPAC play and would improve to 14-2 overall.

As the team looks to the second half of GPAC play, the team is determined to win the GPAC and make a run for another national championship.

“We are excited for the rest of the season and hope that we keep getting better every day,” said senior setter Jamie De Jager.