Throughout much of our nation’s history, the sight of students reciting the Pledge of Allegiance would have seemed commonplace. But in today’s cultural climate, the commonplace is being questioned. 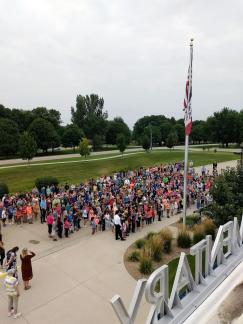 At Kinsey Elementary, most of the classrooms begin the day with the Pledge of Allegiance. To kick off the first day of this school year and continue their yearly tradition, students and staff gathered at the flag pole to say the Pledge. A Sioux Center News representative took a short video of the event and posted it on the news organization’s Facebook page on August 23rd. Within a matter of weeks, the video reached nearly 8 million people’s Facebook pages and 3.9 million views, propelling it to “viral” status.

Troy Lentell, Kinsey Elementary Principal, finds the video’s number of views shocking. What was simply a school tradition has become so much more, starting passionate and heated conversations on social media.

One Facebook user wrote: “I’m so glad to see the majority CANNOT be overruled by a few haters, or in MY words, pathetic idiots. This IS America, let’s always remember that. If you can’t respect it, then leave. Bye Felicia, go try to disrespect another country, any country. Let’s see how far you get with that.”

A different woman wrote that she cried tears of joy as she watched the video, then stood and recited the pledge in response.

Others found the video offensive.

“Really love the way political conservatives try to pawn themselves off as Christians when they are not and how they mislead little kids into doing things Jesus said not to,” wrote another Facebook user, referring to the swearing of oaths.

Dordt sophomore Felix Alcover moved from Puerto Rico to the United States at the age of 16. Puerto Rico is a U.S. territory, but it has its own flag and pledge. Alcover grew up seeing both flags and hearing the Puerto Rican and American anthems at important events.

“In the United States, if you were born here or are just coming over, I guess it’s just kind of the flag you’re under and you’re united now,” Alcover said. “It’s a patriotic thing, having pride in your country and in your flag. I don’t see it as worship.”

Although the fleeting nature of nationalism is up for debate, it is clear we have entered a new cultural climate in America’s history. Instead of volunteering to fight in a war as their predecessors did, some Americans are questioning tradition and challenging those in power. Former San Francisco 49ers quarterback Colin Kaepernick grabbed the attention of the nation when he knelt during the singing of the National Anthem. His “take a knee” protest against police brutality has met both strong opposition and support, reflecting the division in our increasingly diverse nation.

So what made Kinsey Elementary’s Pledge video go viral?

“It’s a conflux of hitting the right moment with the right topic in a sympathetic tone that people can relate to,” Volkers said. “If we knew the recipe, we’d all be making those.”