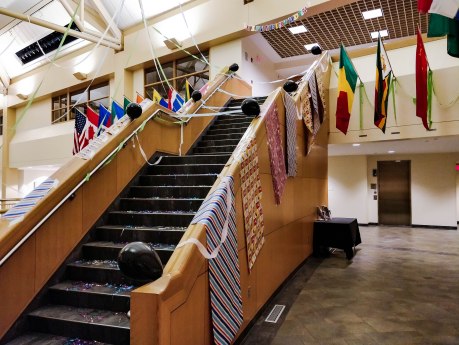 Two weeks ago, a group of students infiltrated the Campus Center on a Wednesday night with one mission in mind: to give President Hoekstra a very memorable birthday. In a process that took four hours and three different trips to Walmart, according to mastermind of the prank Caleb Schreurs, the group hung streamers from staircases and walls and littered the area with balloons. Adding a personal touch, the sign on the President’s office was changed from “President” to “Birthday Boy.”

President Hoekstra, who happened to work from home that morning, described his reaction upon walking the into newly decorated Campus Center at 10 a.m. as “joy and surprise.”

This prank joins a group of other pranks that have been more directly aimed at the president. One of these pranks includes a group of students ringing President Hoekstra’s doorbell past midnight after losing a “What are the Odds” bet. President Hoekstra remembers that he got out of bed and drove to the students who were then walking away, thinking they were in need of something.

Although President Hoekstra does believe that some pranks in the past have definitely crossed the line, Hoekstra embraces pranks at Dordt. “I just think pranks are fantastic,” he said. Hoekstra recognizes that the stress college can put on a student, especially being far away from home, makes pranks a good way to blow off steam and keep college fun and exciting.

In particular, Hoekstra recalls two specific students who pulled various pranks during their time at Dordt. These pranks included breaking into the library after midnight to play a secret game of laser tag and cancelling class for the week by hacking into one of their professor’s emails. The professor had mistakenly typed in their password in the username slot while attempting to log in during class one day, revealing the password “lycospora” to the class. Later on, the two logged into the professor’s email and sent a notice to all the students in the class, cancelling it for the week.

In memory of their trouble-making and fun times at Dordt, these students created a scholarship titled “B-Schutt Lycospora and Laser Tag Camaraderie Scholarship.” The scholarship is named after the two pranks they received punishment for and the individual who handed out the punishment, Bethany Schuttinga. The scholarship is awarded to a student who has shown examples of spontaneous or informal community building and camaraderie that fall within the guidelines of the Student Code of Conduct Handbook.”

Examples of past pranks at Dordt also include students parking a Volkswagen Beetle in the library, stealing silverware from the Northwestern dining hall, and the occasional mode of transportation parked on top of a building on campus. Additionally, a Dordt security car was once stolen, only to be found at the bottom of a lake years later.
One of President Hoekstra’s favorite pranks from his presidency at Dordt College came when a group of students released four piglets in one of the women’s dorms with the numbers 1, 2, 4, and 5 written on them. Hoekstra recalls that it was quite some time before it was realized that there was no #3 pig.

However, President Hoekstra does emphasize that pranks should have their limits. According to President Hoekstra and Robert Taylor, dean of students, pranks at Dordt should not negatively target any individual, violate any laws, destroy any property, or put anyone in any type of harm. As a rule of thumb, if the prank is enjoyed by all, including those dealing with the after-math cleanup, the prank is welcomed at Dordt.

Many pranks in Dordt’s past have not adequately followed these guidelines and punishment has been delegated for them. Nonetheless, President Hoekstra enjoys seeing pranks on campus for the fun and relief they bring and says he is, “thankful for the students that helped me celebrate my birthday.”