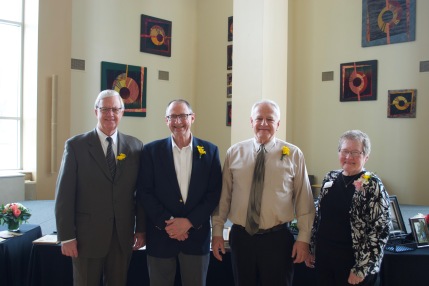 Spring is not only a signal of the end of cold weather and snow. It’s a time of transition and change. Students are nearing summer break and people are looking forward to life slowing down for a few months.

For four Dordt employees, it means the end of an era. Dr. Duane Bajema, Glenn Bouma, Les Netjes and Carol Prinsen are all entering the world of retirement. The four of them have worked for Dordt for a combined 113 years.

Dordt hosted an open house for the four retirees on Friday. Many people came to offer their congratulations throughout the event. Students, faculty and family members all browsed the pictures and news articles placed on the tables and reflected on the memories of the retirees time at Dordt.

Dr. Duana Bajema, the longest tenured employee of the four, began at Dordt in 1977.

“Duane Bajema, as the founder of the ag department, holds a special place in the history of Dordt College,” said Dordt President Erik Hoekstra in a tribute video. “He doesn’t let students come with easy answers. He always pushes them to the “why”? And asks them if what they are saying is Biblical.”

Bajema has had numerous roles in the Agriculture Department. He has been involved with the development of agriculture stewardship center, the Agriculture Club and the chair of faculty assembly.

He is also involved with beekeeping in Northwest Iowa. Last year, he received a $35,000 grant from the Leopold Center to employ technicians to assist beginner beekeepers.

Glenn Bouma has worked for Dordt in numerous roles for the past 20 years. Since 2009, he’s been the Athletic Director. Before the 2017-2018 school year, Bouma’s replacement, Ross Douma started his transition into the role. Bouma has been assisting Douma and familiarizing him with the position.

Bouma began his career at Dordt in 1997 as the Recreation Center Director. He took the role as Head Women’s Basketball coach in 2001 and quit in 2007. In 2008, he took on the role as Campus Event Coordinator before moving to athletic director in 2009. Before Dordt, Bouma worked as the Athletic Director for Unity Christian and as well as numerous other roles.

Carol Prinsen worked as a housekeeper at Dordt for 33 years. While some may not consider her position as glamorous, she has seen Dordt through its many transitions.

“I started cleaning in North Hall 33 years ago,” Prinsen said. “That was definitely a challenge, but I’ve enjoyed meeting students and seeing the campus grow.”

Prinsen finished her career cleaning in the recreation center.

‘I’ve cleaned almost all of the buildings at some point in my career,” Prinsen said. “But I finished my career cleaning up after the football players.”

As far as plans for retirement, Prinsen isn’t too picky.

“I’m just excited to not get up early anymore,” she said.

Les Netjes rounded off the four retirees from Dordt this year. He is leaving his position as Executive Assistant to the Vice-President for College Advancement.

He worked with the vice president with planning and research. He also assisted with raising funds for Dordt and worked to stay in contact with donors.