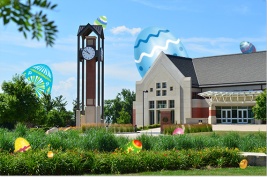 In preparation for Easter, Snapchat launched the “Great Snapchat Egg Hunt!” nationwide on their app. To get Easter eggs, the user had to search snapmaps to find the eggs, get within a certain range and then tap on the eggs to collect them. Snapchat also allowed users to view leaderboards with the scores of their friends and national highscores. The impact of the game reached even to Dordt’s campus, causing many students trouble in the chaos of the hunt.

The app functions similarly to the popular app Pokémon Go, which was a worldwide success in 2016. With the popularity of Pokémon Go came issues, as there were many incidences of trespassing, car crashes and even fights caused by users of the app arguing over Pokémon. Because of the similar construction of the games, the Snapchat Easter egg hunt was responsible for chaos nationwide.

Ryan Stein, a junior at Dordt, was caught trespassing in a Northwestern College girls dorm after open-hours in pursuit of an Easter egg. Northwestern College personnel had to detain Stein while the school got in contact with Dordt representatives to discuss disciplinary action. Stein was given several levels by Dordt as a consequence of his actions.

Another student, sophomore Trenton Peters, was pulled over for accidentally trespassing on private property while searching for Easter eggs near Sioux Center. Peters was let off with a warning the first time, but soon had another encounter with police the same night while looking for Easter eggs in Orange City. This time, Peters claimed to be searching for an Easter egg located just inside of Landsmeer Golf Club. He was given a $50 fine.

Some students suffered even worse than fines and warnings as a result of the game. Junior John Remington fell off the roof of East Campus apartments after he climbed up searching for Wi-Fi so that he could collect a nearby Easter egg. The two-story fall resulted in several fractures in his ankle and a few bumps and bruises.

“It seemed like a good idea at the time,” said Remington. “I just thought I’d be able to collect it really quick and come back inside, but I got too close to the edge because I had to wave to a girl while I was up there.”

Remington’s injury put an end to his basketball season, but he said that it won’t prevent him from playing basketball for Dordt next semester.

Freshman Carly Maroon accidentally interrupted a drug deal while she was searching for Easter eggs in Le Mars late at night on a weekend. Maroon and friends were driving around collecting Easter eggs when she pulled into an empty parking lot. According to Maroon, another car pulled up next to them and rolled down their window.

“He asked what we wanted to buy and when we didn’t immediately reply, he asked where we were from,” said Maroon. “After we said ‘Dordt’ and he asked ‘Where’s that?’ then he must have realized we weren’t his buyers, so he took off.”

After all the trouble Dordt students got into because of the egg hunt, President Eruk Hoekstra spoke briefly at the Good Friday chapel service to ask students to be mindful of how they play such games. The president believes that the students’ behavior while playing carelessly could damage the school’s reputation in the local community.

“As C.S. Lewis said, ‘We are what we believe we are,’ so I think that Dordt students should focus on becoming more than the number of Easter eggs they collected… but, anyways, I have 276 eggs, just for the record,” said Hoekstra in his address.