Skirts swirled around the floor as couples flowed through the moves they had been learning in the swing dance club. Grand dips and turns were executed, along with the basic swing steps tying it all together. 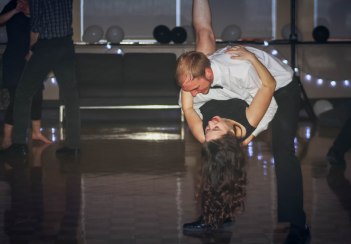 Members of the club started decorating at 5:30 p.m. to set the black and white theme in place. Clear fairy lights hung from the railings and ceiling along with spiraling black decorations while black and white balloons scattered the floor. Dancers arrived and moved onto the floor for a short lesson at 7:30 p.m. The dance officially started at 8:00.

From Frank Sinatra to Bruno Mars, swing dance can be adapted to many styles of songs. Dancers Rocked Around the Clock and several ambitious souls ventured out for a dynamic, yet draining polka, tearing around the floor like a whirlwind.

Even people who just passed by got the chance to learn a few moves. Dancers were more than willing to step away from the floor for a few minutes and teach newcomers the basic steps and a few tricks.

Halfway through the dance, couples competed in a competition for a (somewhat) crisp five-dollar bill. Panic! at the Disco’s “Death of a Bachelor” reverberated in the background as the couples attempted to dance and defeat their opponents in a lively game.

The dance involved a balloon stomping contest. The guys had to move their feet carefully to avoid getting their balloon popped, as each balloon was tied to an ankle. Every round added another balloon and the competition got hotter. The girls received balloons in the third round. When one of a pair’s balloons had been popped, they were out.

Legs swung all around, in an attempt to keep balloons away from stomping feet, whether they were bare or encompassed by heels.

“I feel that it’s so cool and special that we here at Dordt are keeping the more traditional aspects of dancing alive,” said freshman Danikka Jackson, who has been part of the swing dance club since the fall. “I get to take what I’ve been learning at the regular Tuesday swing lessons and practice them in a more formal setting. It’s almost like going to a ball.”

And what a ball it was. Coming off the dance floor, the dancers looked tired, but once they ventured back out, the energy was flowing again. When the dance ended, the floor was scattered with popped balloons, half-empty cups littered the tables and popcorn had been crunched under feet, but the joy from the dancers still echoed in the air.

If you’re interested, you can “swing” by the aerobics room at 8:30 p.m. each Tuesday to learn dance moves and make new memories. A partner is not needed and all are welcome. You can also contact the group on their Facebook page: Dordt College Swing Dance.