Informative as they are, these numbers don’t begin to cover the journey of the Dordt College Concert Choir’s spring tour. Or #dccctour18, according to the music department’s new Instagram. Or #dcccccccctour18, as the hashtag ended up evolving due to a bunch of college students who either couldn’t remember or didn’t feel like remembering just how many c’s belonged after the d. 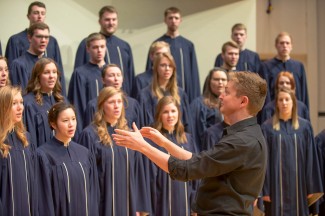 Choir director Ryan Smit is an old hand at touring. He was part of the concert choir as a student at Dordt from 1996-1999 and has led many high school choir tours in his past 16 years of teaching. But every tour is different.

“I was pleasantly surprised by the grace and strength demonstrated by the students in the choir, especially when so much was asked of them,” Smit said. “I was also amazed at how students helped each other and fulfilled their duties faithfully; this made for a very smooth experience for all of us.”

The bus pulled out of Dordt’s campus on a snowy March morning at 5:45 a.m., bringing its passengers toward much warmer weather. From March 9 to 19, the choir travelled throughout the Southwest, stopping in Colorado, New Mexico, Arizona and California. They ended with their homecoming concert in the B. J. Haan auditorium on March 23.

Anna Bartlett orchestrated the tour from behind the scenes, planning concert locations and lining up choir members with host families.

Smit and several students cited Phoenix as their favorite concert on the route.

“All the elements of a great concert were present,” Smit said. “A healthy and fully present choir—no one was sick or absent that evening—a great acoustical space to sing in, an audience that was engaged and a strong performance from the singers.”

Crowd favorites included “Mosquitos,” one of five movements in a piece based on the Pacific Northwest. The choir buzzed melodically, then, near the end of the song, looked around frantically for the mosquito, played by the buzzing of senior Cory Van Gilst. The piece closed with a clap.

The crowd also loved the pseudo-serious arrangements of “Lambscapes,” which set “Mary had a little lamb” in a number of musical periods, one of which included junior Daniel Seaman bleating like a sheep in the middle of something reminiscent of the Hallelujah Chorus. 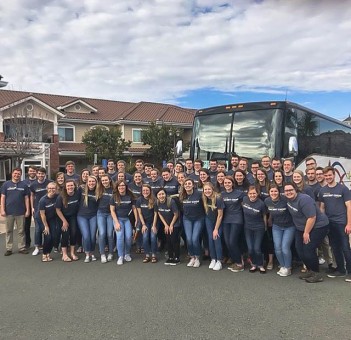 The choir gave 15 performances while on the road, gaining standing ovations in both Phoenix and Denver, but the tour was about much more than just the music.

In Rehoboth, New Mexico, reservation residents treated the Dordt crew to Navajo tacos (fry bread with beans, tomatoes, cheese and other assorted toppings) and a short song in the Navajo language.

As the bus crossed the border into Arizona on the third day, Phoenix native Sheridan Moss turned tour guide.

“Did you know that it takes 100 years for a saguaro cactus to grow its first arm?” she asked those near her on the bus.

She went on to share facts about the landscape, identifying landmarks as the bus drove by.

Every night but one, choir members stayed with host families. Senior Amy Smith would start out each day’s bus trek by leading “Host Family Story Time,” when students eagerly shared tales of both enjoyment and embarrassment.

Seaman stayed with his grandmother during his time in Ripon, Calif., and took a couple students with him to see some newborn foals at their stable.

Sophomore Anna Christians told about setting off a home security alarm during her stay in Bellflower, Calif.

Sophomore Joshua Fopma broke the new bed he was sleeping on, but his hosts assured him that it had just been set up wrong.

Almost all of the choir played endless rounds of Dutch bingo while meeting hosts and concert-goers alike.

The choir intended to spend their free day in Yosemite, but a forecast of snow deterred them. An audience member in Visalia offered to pay for the choir to go to the Monterey aquarium, an establishment with an entrance fee of $40 a person. Smit and the students took him up on the offer.

On their second-to-last night on the road, the choir crashed for the night at a hotel in Richfield, Utah, intending to drive to Grand Junction, Colorado, in the morning to join the congregation there for their morning service.

But, while the students were busy soaking in the hot tub, it started snowing. Hard. By the time the morning rolled around, the roads were slick and snow-covered. The bus, driven by the fearless Henry Kraayenbrink, got stuck in the snow, which prompted most of the bass section to run out of the vehicle and push. They got moving again, but were slowed down because of accidents on the road.

When the bus neared Grand Junction, the chase vehicle, driven by registrar Jim Bos, started smoking. Ice had covered the grille, keeping in too much heat. The bus turned around to pick up senior Sarah Bos who had been riding with her father.

With all the hullabaloo, the concert choir reached Grand Junction an hour and a half late, just in time to sing “Praise to the Lord,” grab some sandwiches in the freezing rain and get on the road again in hopes of getting to Denver on time.

Though they cut it a bit too close for comfort, the choir made it and performed well enough to earn a standing ovation at their last concert on the road.

Smit considers the tour a success.

“I believe we reached our goals of proclaiming the gospel through song and sharing a bit about Dordt College with those we met,” he said. “I enjoyed learning some of the new traditions that have become a part of the Dordt Concert Choir tour experience since I was a student in the choir, and I also experienced anew the lesson that God’s grace is always enough.”