Imagine having to cross a dangerous ravine just to get to class. This is what some students in Haiti face every day.

A group of Dordt engineering students are constructing a walking bridge for a town in Haiti over spring break so the students can get to school safely.

Two years ago, for a senior design project, a group of Dordt engineering students designed and built a walking bridge for a community in Liberia. After hearing about the bridge in Liberia, Professor Elgersma’s daughter, Lexi Oudman, who works for a mission school in the town of Ti Riviere, Haiti, contacted Dordt saying that they were in need of a bridge in their town.

“I personally chose this project because of the work Mission Haiti is doing in Ti Riviere,” said Yannick Habimana, a senior engineering major. “They are empowering a community through kids’ education and sharing the gospel.”

Conner Stephens, David Davelaar, Ryan Pasveer and Habimana saw this as a great opportunity for a senior design project.

The seniors realized this project would also give them valuable experience in the professional fields they are entering.

“We were excited about this project because it’s more than just a project for a grade,” said Stephens, a senior majoring in civil and environmental engineering. “We are actually getting to use our education to make a difference in the world.”

After meeting with school representatives and seeing pictures of the site where the bridge would be constructed, the team decided that a pedestrian suspension bridge was the best option.

After some calculations, they found the bridge would span 45 feet across a 15-foot ravine. Four thick cables will hold up the bridge, which will be anchored to tall concrete pillars at either side of the ravine.

The first step in the design process was what type of bridge design to go with. The team was looking for a design that would be easy to build given their resources and tools. The next step was getting plans to a contractor in Haiti so the bridge’s foundation and concrete pillars would be complete by spring break.

One of the trickiest parts of the design, according to Davelaar, a senior civil and environmental engineering major, was designing a bridge so that any of its pieces could be replaced. Doing this along with a budget and site constraints gave the team a demanding senior project. That was exactly what Davelaar was expecting. He has always had the desire to help people in need, especially internationally. When he heard of an engineering project in Haiti, he jumped on it. 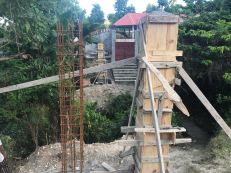 “I chose this project because, in the past, I have seen senior design projects that are just largely conceptual and design-oriented without the project going to completion and being built,” Davelaar said.

Supplies have already been shipped to the site and are expected to arrive before the team. Workers in Haiti have already done the foundation and concrete work for the bridge.

The four seniors are anticipating it will only take them a week to put the bridge up by themselves. According to Stephens, the bridge only weighs 1500 pounds and is calculated to hold more than 14,000 pounds.