For the ninth year in a row the engineering department has enlisted students to create a concrete canoe and enter it along with the team to compete in a concrete canoe race. This year the canoe is called the “Reformer.”

Planning began at the start of the new school year, and construction of the canoe soon followed. The material used to make the canoe itself is not ordinary concrete; instead it is a mixture of plastics, glass beads, dust, water, and small foam beads: a requirement under competition rules. The mixture allows the canoe to float. Two different types of concrete are used in the construction.

“A big change from other years is defining our techniques for efficiency,” engineering student Janneke deBoer said. “Because there aren’t as many people involved this year, we’ve been working on trying to get more done in meetings, and refining our process so it requires the minimum amount of time and effort.” 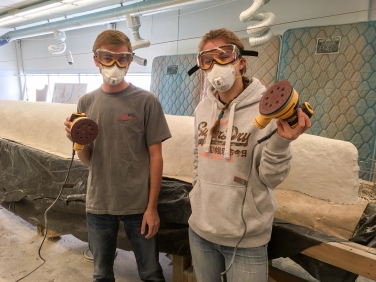 Trenton Ribbens and Janneke deBoer are the project leaders. These sophomores stepping into the leadership role was a big deal. There is a smaller group of students helping, as well as a time crunch. The planning and creation of the canoe is in their hands. Each students puts in around 60 hours total. With the help of other engineers, the group gives over 250 collective hours into the project.

“The seniors have been helping us with this as they have been for the past four years,” Ribbens said. “We are trying to make it our own.”

The process started with planning and conceptualizing. Since they had made canoes in previous years, most of the work involved taking ideas and improving them. The group of engineers made a frame for the inside of the boat, then moved the pieces outside into the greenhouse. There, the group pulled wires and laid the groundwork for placing the concrete mixture into the frame.

“The experience is good, to plan and see something come out of it,” said Ribbens. “The academic core and classes are good, but to come out and apply it is better.”

Laying the concrete happened a few days after Christmas Break. They then placed wet towels on the slushy white mixture to dry. Evidence of the smooth, dusty progress of sanding shows on the outside and inside of the canoe.

The competition is mid-April at University of Minnesota, Mankato. The group is still looking for students who want to help out with building and finishing the canoe “Reformer.” The group will make a board with a list of information about the creation and design of the canoe to show alongside the canoe at the competition.

“If you are at all interested in helping out, you should totes-my-goats-ally come out and row a concrete freaking boat,” said deBoer.