Colorful lanterns dangled from the roof of the BJ Haan as the heavy bass of pop music pumped up the already-excited audience.

Welcome to Talent Extravaganza, affectionately known as TX. The night began and ended with dancing and was packed with a variety of talent in between. Siblings Abby and Caleb Smith hosted the show in matching jean jackets.

“Swingin’ a Miss,” a group from the swing dance club on campus, opened the show with a routine full of dips, aerials, and… shiny blindfolds.

After them came junior Jalyn Vander Wal and sophomore Kaitlyn Baljeu, who signed along with Disturbed’s version of Simon and Garfunkel’s “The Sound of Silence.” They started the performance sitting back to back on the floor, signing together, then stood up and took turns taking the lead, as if having a conversation. Vander Wal also participated in a sign language routine last year.

Comedian Matt Benardis wowed the crowd with a series of impressions. He started with Stewie Griffin, Pumbaa and the like, and worked his way through a slew of faculty and staff members from Tom Clark to Aaron Baart. He amped it up with an impression of President Erik Hoekstra, but could only get through the first couple words before the crowd exploded in laughter and cheers.

A team of croc-wearing ladies then took the stage with a dance routine to showcase their choice of footwear. Junior Steffi Cunard told the hosts that the routine was influenced by Dordt alumni Chris Soodsma. 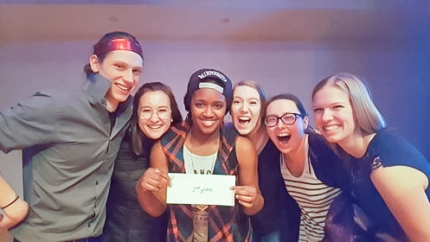 Only one musical performance was included this year: junior Becca Groninga walked on stage to her favorite walk-up song, then sat down at the piano. She held the audience captive as she performed an original piece, rapping and singing in words that came straight from her heart. In the end, Groninga took home second place for $300.

“It was just cool to see how many people cared about me,” Groninga said. “I got so many hugs.” She was nervous before performing, but admitted afterwards that “When I was actually playing, it just kind of flowed.”

The “Liddle Sisters,” senior Erica and junior Carolyn, returned after last year’s TX victory to perform another juggling routine. Their identical shirts and hairstyles matched their synchronized moves. The two juggled their way to $100 for third place with a combination of passing, balancing and wrap-around clubs tricks.

The “Reformed Koreans,” this year’s group of Korean international students, closed the show and took home the $500 first prize with their K-pop dance routine. After their medley of pop songs and lightning-fast dance moves, XX ended with a standing backflip that got almost all of the crowd on their feet, cheering. 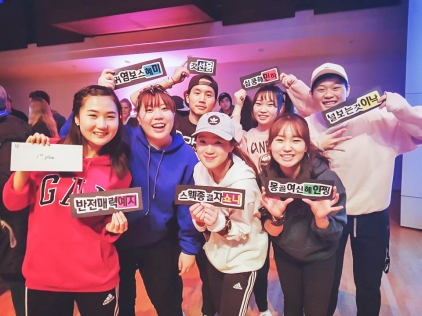 The K-pop group practiced between 15 and 20 hours for the performance. Senior David Lee enjoyed the chance to do something he enjoyed but did not often take time to do. But what he loved most was the friends he got to work with.

“Being able to share that experience with other people made it even more meaningful,” Lee said. “Using a mix of Korean and American music proved how powerful and unifying music and dance can be, bringing different cultures together under the commonality of music.”