With only a couple of games left, the Dordt Blades hockey team look to finish their season on a high note.
The Blades capped a rough first half of the season with a 0-6 loss to Missouri State in Springfield, MO, on Dec. 9. Sophomore David Burns was in the net and had 57 saves on 63 shots on goal. 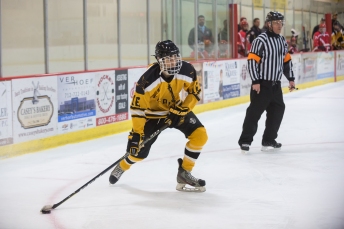 The Blades came back strong after Christmas break, shutting down South Dakota State with back-to-back wins on Jan. 19 and 20. The first game of the weekend against SDSU in Sioux Center was not one to miss. The Blades won in overtime after freshman center Mark Schouten scored the winning goal just under two minutes into overtime.

With the two wins after break, the Blades improved to 5-17 on the season and 0-6 in conference play. Despite the rocky first half of the season, the Blades are confident as they enter their last couple of games of the regular season due to several players returning from injury.
“We have had four or five guys that have been out for the last couple of weeks,” Burns said. “It has been a struggle to keep a full hockey team on the ice.”
As finals approached in December, head coach Nate van Niejenhuis cut back on practices not only to let the players recover from the first half of the season, but also to allow guys to relieve some stress with finals looming.
Although the Blades’ playoff hopes aren’t looking bright, the great bond these players have created throughout the season has grown and will continue to grow in the seasons to come. The whole team is excited to invite new players every year to become a part of the Blades team.
“Everyone fits together like a family,” said freshman center Jacob Petrie. “When we travel on trips, it’s like going on a family trip.”
This great chemistry and friendship will continue into the coming seasons as the Blades boast a very young roster, Petrie said.
Petrie and the others returning next season are excited for what the next couple of years have in store for the Blades as a team. The team is looking to do some heavy recruiting in the next couple of years to help build the program up.
The Blades finished the season with two games at Northern Illinois on Feb. 2 and 3.