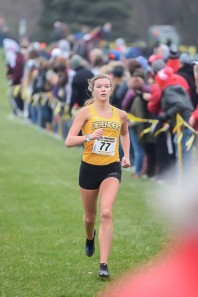 Audrey Brooks is a senior nursing major from Sioux Falls, S.D. As a runner, Brooks ran the fastest time for the Defenders in all seven races this year and finished seventh at the NAIA National Championships. Brooks started running cross country when she was a sophomore in high school and she has proudly run for the Defender women’s cross country team.

Q: What hobbies do you have?
AB: Besides running, I enjoy outdoor activities, playing board games with friends and family, making and going out for coffee, dogs in general, baking, DIY projects and following track and cross country events through social media.

Q: What athletes did you look up to growing up?
AB: In high school when I started running, I definitely looked up to female runners such as Jordan Hasay, Erin Finn, Mary Cain, Emma Coburn and Shalane Flanagan. I still follow a lot of these runners – many of which have had amazing recent races that have brought a bit of fame to the running world.

Q: What sports did you play throughout high school?
AB: Freshman year I played volleyball and golf, then during the “running” week of gym class, that teacher suggested trying out for cross country because I was running with the distance track guys for our two mile run. So, the next fall I did, and I ended up doing well and continuing with cross country and track for the next three years.

Q: Why did you come to Dordt?
AB: Dordt was always a strong choice for me in my college decision process. Right from the beginning, I saw Dordt had a great nursing program as well as a great cross country program and team that I would be joining, on top of the fact that Dordt is a Christian College. No other school was offering me those three priority things at the level Dordt was. Essentially, it was an obvious choice for me – and one I am so glad to have made at this point.

Q: What has been your favorite memory running cross country here at Dordt?
AB: This is such a tough question because there are far too many to choose from. My teammates and coaches have made running all those early miles, long runs and overnight trips a true highlight of my time here at Dordt. So, I will pick just two:

One memory I have is from just recently when I ran the half marathon on Dec. 2. This was not a pretty race for me. Not many things went well in this race: the race started early, when I wasn’t even at the starting line, running for five miles with an untied shoe and so on. However, I ended up running 13.1 miles at a clock time of 1:24:55, which means 6:29 per mile. To put that in perspective, the summer before my first cross country season, my best training run was 20 minutes at a 6:40 pace, which is three miles exactly. That run took everything out of me and I could not possibly imagine doing one step more at that time. However, four years later, here I am running 10.1 miles more, at 11 seconds-per-mile faster on average. This just goes to show that I have made incredible improvements not only physically, but mentally in how I think about what I can possibly do. Even though I did not think of the half marathon this year as going well, it showed the beauty of hard work and how imperfect things can still be good and meaningful.

Another memory I’d like to share is from my junior year of college. I was going out for a run with a few other women. It was late October, so not everybody on our team was currently running because of differing “off weeks” we get after the cross country season. This particular day, it was snowing and brutally windy. This run for us was just another run – we were not specifically training for any upcoming races, just getting in miles. As we were fighting the snow and wind out on the gravel roads outside of Sioux Center, a senior (at the time) said to us, “Ladies, this is the running sisterhood. We have a freshman, sophomore, junior and senior all out working hard and working together when we all would much rather be taking the day off. Take in the beauty of this moment and thank God for putting you here.” She then prayed with us after the run. For some reason, that run and that moment was very impactful to me because it exemplifies running so well – taking all different types of people, and bringing them to bond together over something that isn’t inherently “fun” at every movement. Running and cross country have come to make such an impact on my life because of the simple and unplanned moments like this that show you what is truly important in life and worth putting the miles in for.

Q: How did you feel about your senior season as a whole?
AB: Overall, it was a great season. I can’t say I ever had a bad race out of the eight total races I ran. I put in a lot of work for this season, going back to mileage even leading up to this as a high schooler and as an underclassmen, as well as this summer. My freshman season of cross country, I never actually got to race because of an injury. Even though that may have been a bad start to my collegiate cross country career, this has been the best imaginable finish to end on. I am so proud of the work I have put in and thankful for the God-given ability to be able to finish in this way.

Q: What was it like getting to represent Dordt at Nationals and run the race the way you did?
AB: It was a phenomenal experience and one that I will never forget. I was not even planning on finishing this way. It was my hope to get All-American status (Top 30), and that hope was much surpassed. My coaches, family, teammates and friends were all so supportive before and after the race, and even though racing can be nerve-wracking, I am so thankful for the experience I had and for the ability to represent Dordt in this way.

Q: What are your plans after college?
AB: Next June, I am getting married and then my future husband and I will be moving to Indianapolis, Ind., where he has taken a job as a Controls Systems Engineer.