I have not had a snowy Christmas in nearly a decade.

The last time I even saw snow was 2012 in northern California – and apparently, the Midwest is entirely another level of cold. 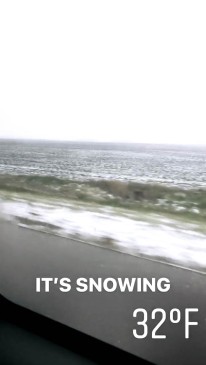 At least, those statements were true until about a week ago on Oct. 27, as I sneaked out the side door of West at 7:30 in the morning. My goal was to grab some breakfast from the Commons without being accosted by zombies. I must add that this attempt went very slowly because I was distracted by white fluff falling from the sky and sitting in little patches on the ground.

Half my Snapchats for the rest of the day included various shots filled with white and the oh-so creative caption “SNOW!”

My name is Emma, I’m a freshman majoring in communication and political science, and I have spent half my life in the very much snowless state of Hawai’i.

Where I lived on the island of Maui, it was a constant 85 degrees all year round. Let’s just say I arrived after my 3,755 mile trip here to the ‘mainland’ with very few sweatshirts, let alone winter coats or gloves.

I remember little snapshots of playing in Iowa snow as a 7-year-old, but those memories do not carry with them exactly just how freezing cold it was or the number of layers I had to wear.

That is something I am learning along with my CORE-140 and CORE-100 classes. Intro to Winter: a CORE survival guide for winter in the Midwest.

I doubt I am the only one who hasn’t become used to the frigid Midwestern winters – and we’ve had a single snowfall so far – so here are a few things I’ve learned so far:

And that wraps up the first and only day of CORE-Intro to Winter. I’m sure as it becomes even colder, *brrrrr* I will learn many more lessons. I pray you have a safe and warm winter!

One response to “Online Exclusive: A White Christmas”