Even after Saturday’s conference-opening loss to Morningside, it is clear this Dordt team has its sights set high this year.

“I always say good teams are often coach-driven,” Dordt head football coach Joel Penner. “You can have a great coach and he can drive hard and get what he wants and you can have a good team. Great teams are player-driven. In other words, the coach doesn’t have to drive as much.”

One of the players that drives this year’s team is Dordt’s running back, Keithen Drury, who leads the Great Plains Athletic Conference in rushing yards with 159.3 yards per game and an average of 7.7 yards per carry.

With leaders on the team like Drury, quarterback Brock Lamle and linebacker Josiah Kotte, Penner believes that in his second year at the helm of the program, this year’s team is ahead of last year’s team at this point in the year.

“We are moving down the tracks,” Penner said. “I use this image of the locomotive all the time and we[‘ve] got to push the locomotive. It’s really hard to give it initial inertia and start, but once it’s going it’s very hard to stop. I would say the wheels are just spinning a little bit faster this year.”

With this trajectory in mind, the main goal of this team is still in sight: the first-ever winning season in Dordt College football history. 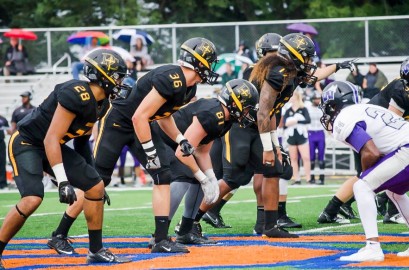 “I think it is a very realistic goal,” Penner said. “We are really going to have to play well and stay healthy. We are going to have keep improving as a team for that to happen.”

Currently sitting at 2-1 overall, and 0-1 in GPAC play, the Defenders will quickly regroup after last Saturday’s loss to Morningside as an undefeated Midland team comes into town on Saturday. The Warriors are coming off a decisive 56-28 victory over Briar Cliff this past Saturday, sit at #13 in the NAIA Division I standings and boast a 3-0 overall record. Even with another tough game ahead of them, there is no reason to believe this Dordt football team will lie down to anyone. To the players and coaches alike, this year is more than just football; it’s about fulfilling this team’s purpose. According to Drury, this team wants to be remembered for more than just football.

“I really hope this team is remembered for being guys who love each other and love playing for each other,” Drury said. “I want us to have the most fun out of anyone in the conference, in the nation, but we also know how to get it done and go hard.”