Dordt women’s softball team is on fire, winning multiple series and taking down their opponents easily. Their current record is 15-14 and 8-4 in conference. 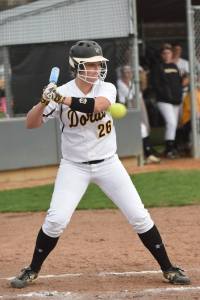 Since the team’s return from Arizona, the Lady Defenders have only lost five out of 14 games. With a record of 8-4 in conference, the team has stacked up notable wins over Northwestern and the College of St. Mary. Some of the toughest games are still to come, however, since these women have yet to play Morningside, the best team in the conference, along with Hastings and Concordia.

Tianna Top and Rachel Evavold have proved themselves to be the best pitchers on the team. Top leads the team with nine wins and six losses, and Evavold with three wins and two loses.

The team rages on to face their final meaningful games. First on the docket is an impressive Morningside, who holds the record of 8-2 in conference.

There is no doubt that the Defenders will make the playoffs, but the question remains: in what seed? Seeding can matter because the Defenders could face either a team they have already beaten or a team that could give them a tough time and potentially end their season. Hastings, along with Morningside, could give Dordt trouble, as they have nearly the same record as the Defenders with a record of 9-5. Concordia, another contender, ties with the Defenders’ 8-4 record.

Will the Defenders be able to step up to the challenge? We will just have to wait and see.