“I am 100 percent Dutch” they say, or “My family is mostly German.” Genetic generalities are not uncommon for people to say, especially if they are second or third generation Americans.  There is a comfort we find, as Americans, in identifying with ethnicities outside of the United States. With our relatively short history as a country, we find security in knowing that there is more to us than just being “American.”

I am no exception to this genomic fascination. Living in Sioux County and, more specifically, Orange City my whole life, I always felt out of place. People here are extremely proud of their Dutch heritage, and the phrase, “If you ain’t Dutch, you ain’t much” gets thrown around in casual conversation. I always knew that this wasn’t a direct attack against me as a person, and yet deep down I also knew that a majority of people living here believe this expression to be true.

As I grew older, my curiosity about my own ethnicity only became greater. Being adopted, I never knew much about my birthmother. I would ask my parents questions about her; I wanted to know everything they knew. The more answers I got, though, the more questions I had.

This quest came to fruition in May 2015 when I met my biological half-brother, Wes, for the first time. We had been corresponding for a few months, and then he had been planning to drive through Northwest Iowa so I invited him over to meet in person.

I was excited and terrified in the days leading up to meeting him. Finally, I thought, I was going to meet my brother after only knowing of him for my entire life.

As is to be expected, our first encounter was quite awkward. How often does one meet her blood sibling, someone she has no prior knowledge of, for the first time as an adult?

I had known about Wes’s existence for as long as I can remember. However, my initial contact with him via Facebook was the first time he learned he had a sister. Our birthmother had kept her pregnancy with me a secret from her family, and immediately after I was born she put me up for adoption. She then passed away six months after I was born, never having the chance to reveal to her loved ones that she had another child. 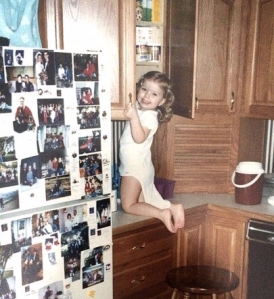 Little Jaden as a toddler

Becoming an adult and having to sift through all this new information, on top of trying to figure out who you are as a person, is a daunting task. I knew that I needed to know for myself who I really was, what my past held, and then what my future would hold.

In the fall semester of 2016, I saw an advertisement for a genetic DNA test being offered by Ancestory.com. They promised that I could “discover your ethnic mix today!”, and I was immediately intrigued by this idea. After all, I had spent most of my life wondering who I was:  How Irish am I? Was I actually Dutch? All these questions, this company promised, could be answered.

I told my parents that I wanted this DNA test kit for Christmas, and in December it came. Once I had it in my possession, however, it took a while to build up the courage to actually spit in the little tube and send it in. I still don’t know why I was nervous—in part, I suppose, I had spent the better part of my life wondering about my past, and now all I had to do to find out was spit in a tiny tube.

The test kit said it would take six-to-eight weeks for the result to be processed. But every time I checked my emails from them, these messages always said, “Due to the increase holiday kits, our labs are backed up. It will take longer than expected.”

I began to forget that I had ever sent in my spit sample until two weeks ago when I woke up to an email saying my results were in.

I was ecstatic and extremely nervous. I had no idea what the results would say and I was scared of seeing something that I wasn’t expecting. It was all misplaced anxiety, I know, but I was still completely shocked when I read though the results:

These numbers surprised me. I had been told my whole life that my birthmother had claimed we were German and Irish, and yet my genetic makeup shows I am only ten percent German and less than one percent Irish.

Reflecting on these results just makes me think about all the people who claim to be 100 percent Dutch. I truly believe that there is no such thing as a perfect, genetically “whole” person. There are always outside influences in our DNA that we don’t even think to look for. We are a world of migrators and that is something that makes us so unique.