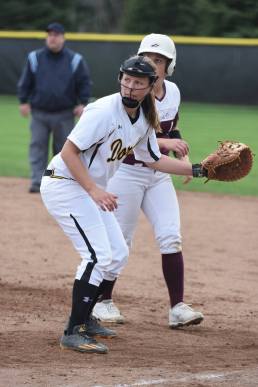 Coming to Dordt College was an easy decision for softball first baseman Michal Huizenga. Hailing from Grandville, Mich., Huizenga was familiar with northwest Iowa because she had family in the area and visited the rolling hills when she was growing up.

“It just felt like home away from home,” Huizenga said.

Playing softball at Dordt? Also, an easy decision. Starting with T-ball when she was five years old, Huizenga grew up around the game. During her childhood, she progressed to Little League, then travel ball in middle school and then softball in high school and college. When it came time to choose a higher-education institution, Huizinga said she visited Dordt and really liked both the softball program and Coach Zomer.

Now, she loves Dordt itself and the close-knit softball team most.

“The community and family feeling on the softball team is something that not much compares with,” Huizenga said.

As a senior, Huizenga leads by example and shows her newer teammates what Dordt softball is about and what it means to be a Dordt softball player. The softball team, according to Huizenga, is about family. They all play and fight for each other on the field. They all want to work hard because they care about each other.

“This is one of the most talented groups of girls I’ve played with in my four years at Dordt,” Huizenga said.

Huizenga will not only miss her teammates, but also her coaches and their passion for the game. She said the coaches have made themselves available to their players to work on hitting or any other skill they may need more practice on. Huizenga also said she’ll miss playing for Dordt and wearing the Defenders uniform.

After softball concludes next month, Huizenga and her husband plan to move to Michigan, where she will student-teach high school math during the fall semester.