On Monday, March 27, an unnamed truth-seeking agent from The Diamond intercepted intelligence reaching back to last November. This evidence implicates a disturbing media cover-up and questions the integrity of The Diamond since the time of editor Jonathan Janssen’s departure from the staff in early January. 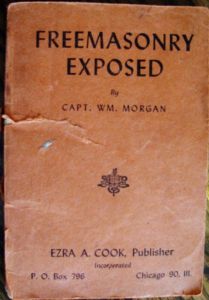 At the time, the article was anonymously submitted to Janssen and senior Ashley Bloemhof, then co-editors of The Diamond, with the name “William Morgan” attached. After investigation, the name proved to belong to a famous anti-Masonic advocate who disappeared under suspicious circumstances in the early 19th century.

According to Diamond staff members, Janssen and Bloemhof strongly disagreed over whether The Diamond should publish the article or keep it concealed. In the end, Janssen published the article without Bloemhof’s consent, leading to further division between the editors.

After the paper was released, The Diamond received excessive backlash from the administration and much of the faculty. Many professors openly mocked Janssen in front of their students with ad hominem attacks on his character, personality and appearance.

Now, recently-intercepted emails implicate Bloemhof and several of the most outspoken professors against Janssen as accomplices and disinformation agents, employed by the administration to detract from the surfacing of disturbing truths begun by “William Morgan,” now confirmed to be an alias of Janssen.

In one email, sent after Janssen’s article was published in November, Dordt College Provost Dr. Eric Forseth directs Bloemhof to “discredit Janssen by any means necessary.” When Bloemhof asks Forseth for advice in achieving this goal, Forseth suggests running several controversial articles in The Diamond as diversion operations. One such article, as suggested by a different email from Forseth to senior Caeden Tinklenberg, was a political column on the global Women’s Marches. The article did go to print, prompting several impassioned replies in the next issue and successfully wiping the public mind of the November article.

In another email, Criminal Justice faculty chair Donald Roth faces a job-performance warning for questioning the administration in the wake of Janssen’s allegations. “Janssen doesn’t seem like a team-player,” said Forseth in the email. “Do you want to be part of the team, Don?”

Above all, emails between maintenance and administration – including a disturbing picture of Janssen, surrounded by concrete, and bound and bloodied – suggest that he is being held captive somewhere in Dordt’s maintenance tunnels.

In order to confirm the truth of these photos, undercover Diamond operatives snuck into the tunnels in hopes of finding Janssen, but he could not be found.

“The whole place is like a labyrinth,” said an anonymous operative. “We could hear some kind of wailing. We can only assume it was [Janssen.]”

The official story is that Janssen traveled to the UK for the Scholar’s Semester in Oxford. However, these leaked emails suggest that an independent service, hired by Dordt College for PsyOp campaigns, has been managing Janssen’s online and interpersonal presence, manipulating photos and videos to make him appear as if he’s in the UK.

Email evidence suggests that a COINTELPRO-like operation is taking place at Dordt College, with agents forming a clandestine shadow administration under the manipulation of the investment board and behind the backs of many of the faculty members.

Other evidence implicates President Eric Hoekstra, Provost Forseth and several other administrators in the Council of Christian Colleges and Universities in attempts to establish a New World Order (NWO) in the name of “kingdom-building.” Evidence also suggests that even the Masonic evidence was planted at Dordt College in a false-flag attempt to divert attention from the true mass-takeover plans.

The writer advises Diamond readers to be on the lookout for hit pieces on Janssen in upcoming issues, as well as other false-flag narratives that attempt to draw awakened students and faculty away from the trail.

Big Brother is watching you, telling you “War is peace. Freedom is slavery. Ignorance is strength.” Keep on the trajectory to truth and the truth will be found.

Editor’s Note: All Zircon articles are the Dordt Diamond’s semi-annual homage to the time-honored, First Amendment-protected, great American tradition of satire. The literal truths of these articles are not to be taken at face value, but we hope the hidden truths allude to the absurdities of some of the realities we face in society today.