The owner parked his truck alone in the lot between East Hall and the De Witt Gymnasium, proclaiming his message to anyone motoring past on 7th street or gazing out of Eckardt Lounge’s floor-to-ceiling windows: 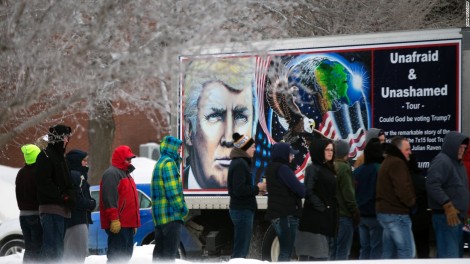 People line up at Dordt College for a Donald Trump campaign rally.

The message enclosed door panels both sides of the new white Chevy pickup. Scrawled in red paint only a few days after Trump’s election, the message also molested the tailgate.

Last year, the Trump campaign made an appearance in the B.J. Haan on Dordt’s campus. Since then, the late-January visit and early-November election of President Donald J. Trump have done more than just motivate persons to write controversial messages on vehicles.

This year, Jan. 20 was a visit day at Dordt. The TVs in the commons were tuned to Trump’s Inauguration and most heads turned to watch the scene unfolding on Capitol Hill between bites of burgers or stir fry and gulps of chocolate milk. Prospective students and parents shared emotions of excitement and apprehension while watching a man swear the oath of office and become the most powerful figure in the world.

Eric Tudor, Assistant Director of Admissions at Dordt, said there is no evidence that Trump’s visit to Dordt had a negative impact on admission numbers.

Dordt hasn’t, however, remained completely clear of outside scrutiny over Trump.

“It is a concern for us socially,” Wilson said of the large volume of complaints the college has received for allowing Trump to speak on campus, “but we try to stay above the fray as much as we can.”

President Erik Hoekstra provided the following in response to the question of how Trump’s visit and presidency will impact Dordt (the Diamond agreed to print his quote its entirety):

The response to the Trump election and early days of his presidency has been, for the most part, publicly quiet on our campus—which is simultaneously heartening and concerning to me.

Heartening, because I believe both students and faculty members are pondering, praying, discussing, and measuring his early moves against Biblical norms for leadership and the call to subordinate ourselves to proper authority. Our campus has not fallen prey to what I see on some other campuses of groups talking ‘past’ each other in emotional and visceral responses to Mr. Trump which have broken down community in some of those places.

But this ‘public quiet’ is also concerning for me—we need to be active as Christians in the public square—to have thoughts and talk about those thoughts with other Christians. So, if our ‘public quiet’ over the past months signals either apathy about politics or disdain for those who have real fears about the Trump administration, then I’m concerned.

Overall, I do know that small group conversations are happening—and both Aaron’s chapel after the election and Jemar Tisby’s visit this past week [Jan. 30-Feb. 3] point to ways that we’re having a positive ‘public and measured’ conversation about our current national political scene.

In sum, I would say—it’s still really early in the Trump administration to make a determination of the impact at Dordt College—and my hope is that we’ll all stay in the conversation in the months and years to come with a Biblical and Christ-centered viewpoint as our primary filter.

Hoekstra also wrote a letter following Trump’s rally as an attempt to remain above the fray.

The letter was the second top rating post in terms of likes on Dordt’s Facebook page. Leah Zuidema, Dean for Curriculum and Instruction at Dordt, interprets the positive social media feedback as affirmation of the college’s decision to include Trump.

Looking to previous campaigns, Tudor was a freshman at Dordt when Obama beat McCain in 2008. “Trump has certainly divided campus more than Obama did” he said. “When Obama won, there was disappointment, but students weren’t concerned in the way some are now.”

Even so, Tudor thinks Dordt students are handling the controversy with more maturity than most. “I just got back from Gonzaga [University] and the environment there was way more polarized.”

Tudor credits the healthy community at Dordt to two factors: lack of anonymity and critical thinking. “Dordt really encourages critical thinking right off the bat and we teach that open dialogue is healthy—even on a small campus.”

Tudor thinks that the conservative presidency will likely be good for Dordt—at least in the short term.

“Other candidates were promising free public education and that’s a big threat to private schools. We won’t have to worry about that for another four years hopefully,” said Tudor.

Amid controversy, Zuidema hopes to maintain the level of political engagement that she has seen over the past year, and she’s not alone. At the Jan. meeting of the Academic Senate, Zuidema heard resounding appreciation for how involved students and faculty were in political dialogue and the political process.

“We are trying to find ways to sustain and encourage that energy across the four-year cycle in a nonpartisan, umbrella-like approach that addresses what it means to be politically engaged and a Christian” she said. “I think we are called into the challenge and we shouldn’t run away and leave politics to the rest of the world.”

2 responses to “Trump’s impact on Dordt community and image”