This past week, Dordt College baseball and softball continued their yearly tradition of traversing south for spring break to soak up the desert sun.

The baseball team in Arizona.

With snow on the ground in March, Dordt baseball and softball are left with few options when attempting to squeeze in non-conference games. Needing the preparation for the crucial slate of conference games ahead, Dordt joined a handful of NAIA colleges and universities 70 miles north of the US-Mexico border.

Defender baseball won six of its 10 games played in Tucson, Ariz., including a 10-3 victory over No. 16-ranked Jamestown. Baseball’s showing ranks among its best ever in Arizona, especially over the past several years. Dordt baseball went 5-5 during last season’s spring break trip. 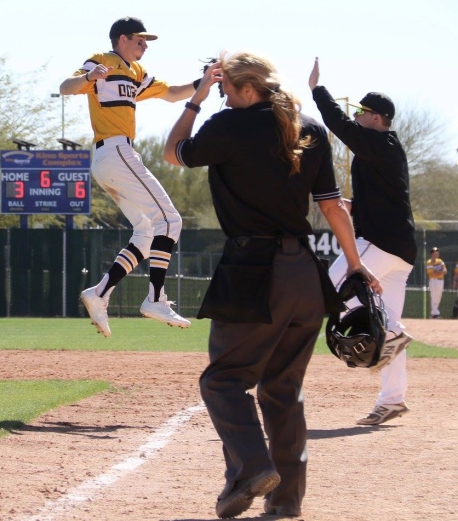 “This year was our best week in Arizona from all my 4 years playing,” said starting shortstop Cameron Gingerich. “We were aggressive and hitting the ball with authority and more power than we have in the past.”

Several players exhibited that power and continued their strong starts to the season. Outfielder Colton Van Otterloo, who led Dordt with four home runs last season, already has three long balls to his name. But that’s not all.

During a March 7 doubleheader against Winnipeg, Van Otterloo put together one of the most impressive individual offensive performances Dordt College has ever seen. Over the course of two games, Van Otterloo went 6-for-9 with two home runs and six runs batted in. He hit for the cycle in game 2 of the double header, becoming the first Defender to hit for the cycle since Tom LeMahieu—Rockies’ 2B DJ LaMahieu’s father—in 1977.

Dordt’s starting pitching kept the Defenders competitive in close games when the bats failed to produce. Both Brandon Fokkema and Michael Grady own sub-3.00 ERAs, and Connor Hopkins is averaging nearly 11 strikeouts per nine innings pitched.

“Our starting pitching has been solid for us all year, and if that continues, we’ll be able to compete in every GPAC game and have a chance to win,” Gingerich said.

In the end, Dordt’s success in Arizona means little without the production in GPAC competition. Still searching for its first-ever GPAC Tournament birth, baseball will not be content with a .600 winning percentage in Arizona.

“A lot of good stuff came out of [Arizona],” said starting catcher Josh Van Eps. “I think we are going to be very competitive in the GPAC this year.”

Dordt baseball hopes to build on their spring break momentum and make history in 2017.