This spring, engaged couples on Dordt’s campus have the opportunity to take part in a pre-marital workshop. Many couples have already signed up and started to meet with counselors.

However, many single people on campus wonder what valuable information these couples are receiving. John Smith, a sophomore at Dordt, thinks that something fishy is going on.

“I don’t know what they’re telling couples in these workshops,” said Smith, “but I kid you not, I saw a couple come out of one session carrying something shaped like a sword. What the heck?”

Other students report seeing couples in similar situations. Many have started to hypothesize, and they came up with a few of their own opinions. Samwise Gamgee, a Dordt senior, believes that these couples are being recruited into some kind of army.

“I think this is Dordt’s way of instigating the theory of survival of the fittest,” said Gamgee. “They’re equipping all the couples with weapons so that they can wipe out all the single people who haven’t managed to find a significant other.”

Other students agree with Gamgee. Adelaide Bonfamille, an education major, fears that this hypothesis is true.

“People at Dordt know that we need to keep up our appearances by having the highest percentage of engaged or married students of all Christian colleges,” said Bonfamille. “Wiping out all the single people makes this percentage even higher, thus making Dordt look really good in that area.”

While there is no firm evidence supporting this theory since none of the couples going to these workshops will tell anyone anything, single students remain on their toes. Olivia Flaversham says she can’t trust anyone anymore.

“I’m even scared to go to class,” said Flaversham. “What if I get so caught up in my schoolwork that someone comes behind me and takes me out? I’m thinking of transferring to a state school. I’m sure they don’t have this kind of problem there.” 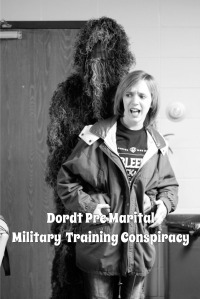 Of course, all Dordt authority figures are adamantly denying this theory. Benedict Cumberbatch, a representative from Student Services, brushed away the hypothesis with his reasoning.

“Why would Dordt want to wipe out their student body?” said Cumberbatch. “There would be no one left to support the school financially. However, there is a chance that these rumors were spread to encourage single students to get that ring before spring.”

If single students pick up on this incentive, the hope is that the number of engaged and married couples on campus will increase. President Erik Hoekstra expressed his hope that many students will find love.

“Spring is the time where love spreads everywhere,” said Hoekstra. “I wonder if the snow is causing this to be delayed though. Stupid snow.”

There you have it. The stupid weather and the subject of rings before spring (two topics highly talked about at Dordt) finally come together to create one big problem that really stinks.